By Stacy - April 22, 2018
Happy Earth Day, my friends!!! Today's topic is near and dear to my heart. Many of you know I am vegan/plant-based and have been for a little over 5 1/2 years. It started as a way to decrease my cholesterol and then has turned into so much more. I am not here to convince you to become vegan. Unfortunately PETA and other extreme vegans have put a really bad taste in people's mouths! But I am hear to encourage you to up your plant intake and decrease your meat consumption. This is the Single most important thing you can do to create less waste. Why do ask? Here is some data:


Here are some facts you may not know (all from the book, "Whole" by Dr. Colin T. Campbell):
"Animal protein production requires eight times as much fossil fuel as plant protein."

"The livestock of the United States consumes five times as much grain (which is not even their natural diet) as the country's entire human population."

"A United Nations-sponsored workshop of about 200 experts concluded that 80 percent of deforestation in the tropics is attributable to the creation of new farmland, the majority of which is used for livestock grazing and feed."

(paraphrased) A study by the United Nation's Food and Agricultural Organization reported a connection between animal food production and global warming, stating it attributes 18 % of global warming, which is more than the department of transportation.A more recent study by Robert Goodland and Jeff Anhang at the World Bank Group have attributed livestock rearing to causing 51% of global warming.

All that we are doing to help reduce our climate crisis, such as replacing incandescent light bulbs, lowering our thermostats, throwing away less garbage and instead putting them in your compost or recycling, are all GREAT things, but they will not have the same impact as eating less meat products.

Need some ideas for how to decrease your consumption? 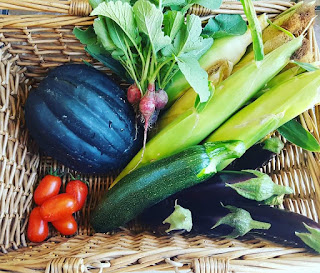