By Unknown - April 10, 2016
Good morning from my sunny and warm back patio! These past 2 weeks have been so incredibly gorgeous! We have had the back door and the windows open to cool down the house, as well as bring in fresh air, and it has been so nice! We are trying to avoid turning on the A/C as long as possible!

As I sit here with the sun warming my face, listening to the chickens cluck, birds chirp, and coffee brew, I am feeling an overwhelming sense of gratitude. I am such a fortunate woman to be surrounded by so much love. This post is a recap of my 2nd triathlon but what it all boils down to is love. Let's dig in.

Friday night kicked off the triathlon with the swim portion. The YMCA Spring Spring Triathlon breaks up the swim from the bike and run portion, which is AWESOME! You actually swim in the pool, in your own lane, and get to do it on a separate day, making it just so much more enjoyable. Going in to this race, I, of course, had dreams of beating my times from 3 years ago. I am a pretty competitive person but am not nearly as fast as the folks who I compete with. The idea of placing in the top 3, even for my age limit, is not super likely. And I am SO okay with that. So instead, I compete against myself.

I went into the swim knowing I had swam 16:38 previously. I felt pumped and good going in. I knew my training had been consistent so I felt pretty good about it. The main thing that I feel like I have lost though is speed. I still have strength and endurance but the speed just is not where it was 2 and 3 years ago. The swim itself was pretty uneventful. I pushed myself as hard as I could and ended up with a 17:31 finish time. I will be honest, I was disappointed. I kept telling myself as long as I did my best I would be proud. I was proud but I still had that bit of initial disappointment.

So that night I went to bed trying not to beat myself up. I woke up with a good attitude and took some time to reflect on the patio. 3 years ago this month was when my knee first started to bother me, the first sign of my psoriatic arthritis. I have been through so much over the past 3 years, trying to cope with the diagnosis, then the pain, fatigue, and just my altogether "new" body I have now. Comparing myself to me 3 years ago is not truly fair, since 3 years ago I was in a different space. My health was different. My mental health was different. I am different than I was. And that's okay.

So I went into the race feeling confident and planning to just enjoy the process and be proud of what my body is capable of. I got to the park and shortly after my family arrived. My parents came with my niece and my second cousin and they brought homemade signs for me. It was so sweet and a really great boost! I felt support and love, and it pumped me up! I also met up with my coworkers, which made the race even more fun! We were there with the motto of "crossing the finish line standing up" which took the pressure off.

I started the bike portion of the race based on my swim time. Even being slower this year I still feel like that was my strongest leg. The course was different this year due to construction. There were a few more hills with the course change and it was about 20-30 degrees hotter this year than 3 years ago. I definitely think that played a role in my bike time being 12 minutes slower. I actually started before my two coworkers and then they both passed me. They were cheering me on and it helped keep me going, especially during those hills at the halfway point.

When I got back, my parents had been concerned since I was so much slower than last year. Even Addi said, "why'd you take so long?" as I was coming in. It was okay though, I made it back and now had 3 miles to run. The running looked a lot like walking and jogging, but I just kept putting one foot in front of the other. There were people headed back and were saying words of encouragement. I love fellow racers! Everyone is so nice! I got to the water station (I had needed one like 4 miles into the bike ride so it was a LONG time coming!) and passed my coworker, Debbie. She yelled words of encouragement. Hearing my name called, the volunteers started yelling my name. Seriously, the volunteers were amazing! It was the boost I needed to keep going. In order to give back, I was yelling words of encouragement to the racers behind me. There was a lot of love being shared the last mile of the race! As I neared the finish line I saw my people: my parents, my niece, my cousin, my husband, and my husband's cousins waiting for me, cheering me on. It immediately put a smile on my face and made it that much easier to cross the finish line. I ended up finishing about 5 minutes slower than the previous year for the run portion.

Finally, the most significant love that was shared yesterday was the love I have for myself. It is SO easy to beat yourself up and think "I could do better" or comparing yourself to someone else. Yes, reading that I was 12 out of 12 in my age group did NOT feel good, but I am choosing to let it roll off me. I still finished. I am still strong. My body is still very capable of great things.

I love pushing myself and I wouldn't give it up just because I had a bad race or continuously fell behind. Growing up I never even tried anything athletic because I wasn't as fast or as coordinated as my peers. I have since realized that only YOU put limits on yourself. Even if I am the slowest person on the course, I am still an athlete. I am still getting out there and challenging myself, rather than sitting on the couch. All you got to do is "tri" :) 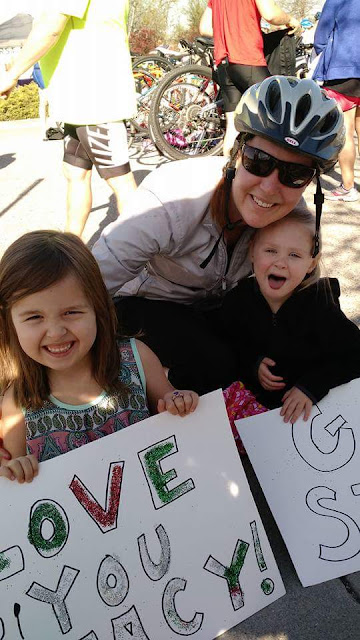 Two of my cheerleaders! 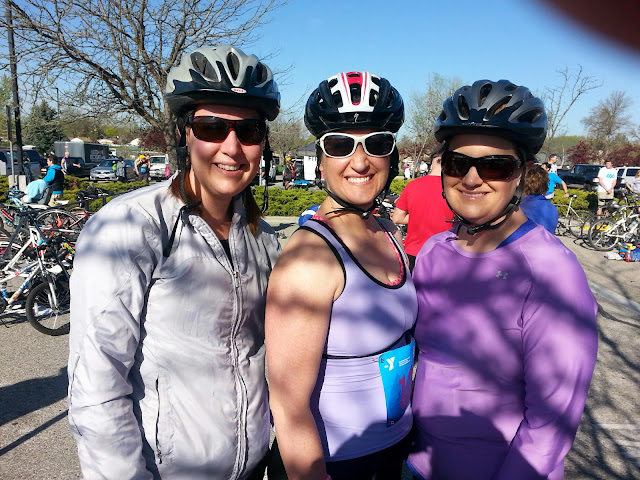 With my coworkers before the race 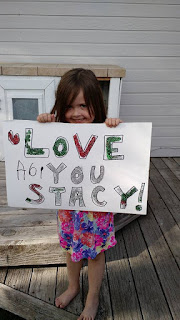 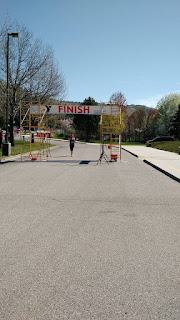