By Unknown - February 13, 2016
Our darling dog, Kitty turns 11 tomorrow! A celebration was in order! Kitty is the oldest of our pets in our animal kingdom, and as many might know, 11 is worth celebrating in dog years! Kitty is now about 57, according to a dog calculator I used, or 77 based on the old thought of multiplying their age in human years by 7. Either way, she is getting up there in years! So I thought, why not throw her a little party? Yes, I know I am either super weird or incredibly adorable, I am good with either!

So first, we needed a guest list. Since Kitty has a baby brother now, that was easy. Next, my cousin Kayla, has a puppy 6 weeks younger than Winston, whom Kitty has met and seems to get along with well. So, Mr. Baron made the guest list too! And then, well, Kitty has more cat friends than dog friends, so we ended the guest list there. Quality over quantity, right? 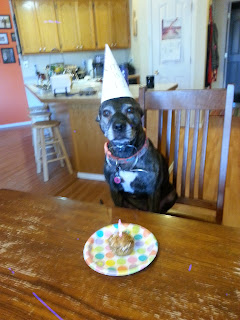 Kitty is such a good girl 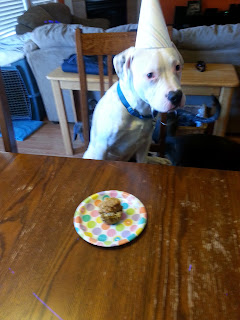 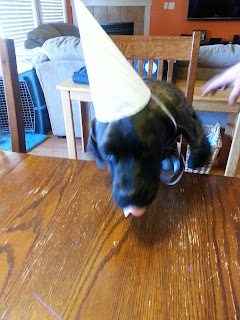 Right before Baron was half way on the table! He is such a fun puppy!

Then, I had to find the perfect cupcake. I starting searching and I was not really digging the "dog specific" recipes. They either had meat in them or had way too any processed ingredients. I wanted her to have a treat, but not give her diabetes. And I wanted it to be human friendly too, specifically one that I could eat with her. I had this sweet pumpkin I bought around Thanksgiving that has been decorating my table all winter and thought, Yes! A pumpkin cupcake would be the best! Kitty (and Winston) love pumpkin. Then since I wanted it to be gluten free, I thought oats would be a good flour to use. So I searched "pumpkin oatmeal cupcakes" and found these. I used oat flour instead of whole wheat (blended oats in my ninja) and then used pumpkin in place of oil (yummy, more pumpkin!) and then flax seeds instead of eggs. Otherwise I followed the recipe to a T. Then I added peanut butter "frosting" on top. I tried to whip the peanut butter, adding a little soy milk and powdered sugar to make it more of a frosting, but it didn't end up whipping well. Instead of adding more sugar, I thought it best to leave as it. It would still taste delicious, right? 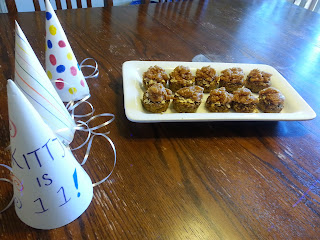 Finally, the dogs needed party hats. I found a pattern online and decorated them myself last night. I think they turned out pretty cute! 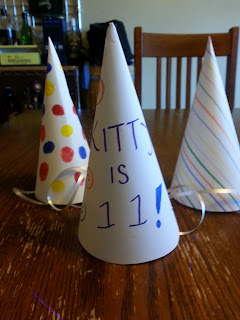 So then it was time to P.A.R.T.Y! Fortunately I have a supportive husband and he helped me attempt to wrangle these pups into a party hat, sit on a chair at the table, and try NOT to eat the cupcake before we got a picture. We did alright, got a couple good photos. We did manage to get a few laughs in and got to see the pups loving their cupcakes. I would say it was a success! Plus I got to eat one too and now we have a few treats for the next couple of days! 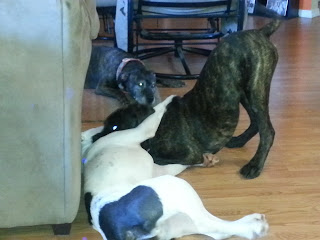 Pretty much the rest of the party. Kitty watching the puppies wrestle, I am sure rolling her eyes at their immaturity. 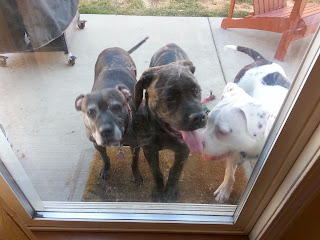 The only way to get them all to look at me at once, put them outside!

We sure love our Kitty girl! You never know how many birthdays she has left so we wanted to make this one count!

Anybody else throw a doggy birthday party? Think I am nuts? I'd love to hear it :)