Life with a Puppy!

By Unknown - October 06, 2015
Many of you know that Tyler and I adopted a puppy nearly 2 weeks ago so I thought I would give an update.

A few months ago Tyler and I started talking about whether we are forever dog people. We already have a dog, Kitty, who is a little over 10 1/2 years old. This discussion included what kind of dog, how we plan to raise him/her, as well as when. After quite a bit of pondering and talking, we decided in terms of the kind, we are pit bull lovers, through and through! Plus I truly think rescuing animals is so important and I was hoping we would find the right fit for us.

Prior to Kitty, Tyler and I both had never owned dogs. We always wanted to but we come from non-dog and non-cat families. We grew up with rats and similar animals. All cute but not super cuddly (although I am sure one could argue). Kitty came into my life as a 5 year old dog and while she does have her quirks, she truly is such a sweet and loving dog. I love her around any child who has ever been over to our house, I love that she doesn't shed much, I love her size, and overall, she is just a good dog. When I envisioned having another dog, all I could imagine was a dog like Kitty.

The biggest drawback to having a pit bull is, of course, the bad rep they have. Many people are afraid on pit bulls and I can tell when I am walking her. People tend to tense up and try to avoid Kitty. Some dog owners try to love on her, which she loves, but unfortunately Kitty's biggest weakness is she does not like many other dogs. She tends to bark at them and growl and I never know if she is going to sniff them or lunge at them. This is something we plan to work on with our new pup.

So through our discussion and the interwebs, Tyler and I found Boise Bully Breed. They are a non-profit organization that helps to rescue bull dogs as well as black dogs. When looking on their page, we saw that they had just rescued a dog who had just had a litter. We sat on it for about a week and then decided to apply. We have friends who worked with this organization so we knew they were professional, plus we share a love of pit bulls and are passionate about improving their reputation. Also, we got to rescue a puppy, which is hard to do! So we applied, had a home inspection, got approved, met the litter and picked out our Winston!

We ended up getting to bring him home early because his mama was getting pretty impatient with her babies crawling all over her and biting her. We picked him up from the foster home and let's just say, the last 2 weeks have been a whirlwind! I have been trying to read a ton on how to raise a puppy, as well as all of the attention Winston himself needs! The cats have been adjusting as well as Kitty, so we have been doing our best to give them all love and try to keep the atmosphere supportive. There are a LOT of deep breaths involved! House training in and of itself is a full time job!

So here is what we have been up to!

Here we are meeting him for the first time: 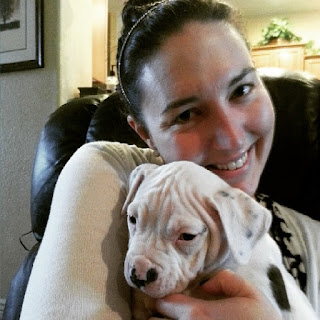 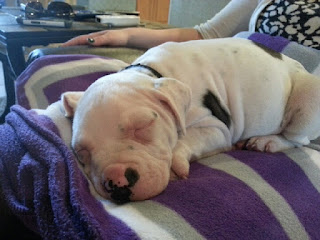 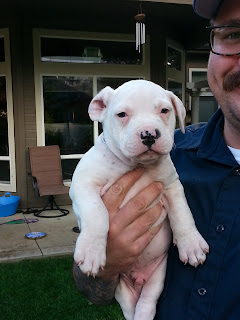 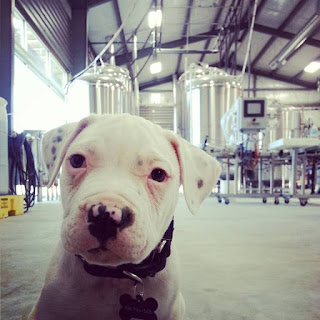 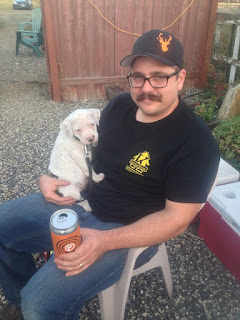 Winston hanging out around the camp fire up in New Meadows 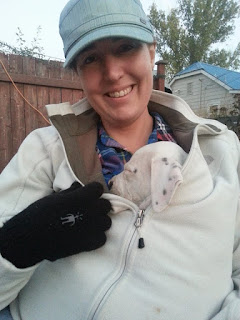 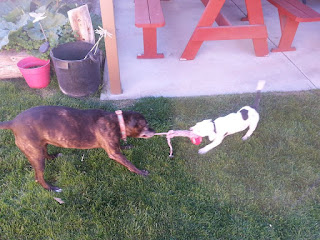 Kitty and Winston playing together 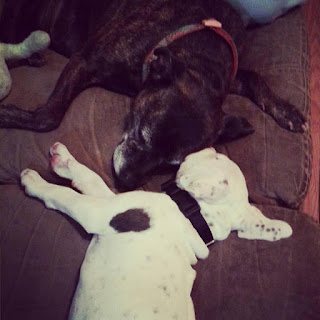 Winston just adores Kitty! He follows her around and sleeps next to her every night 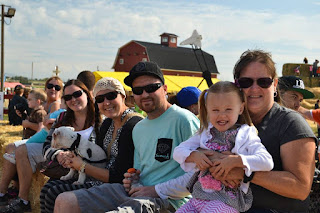 With my family at Linder Farms this past weekend. Winston had fun eating the squished pumpkins 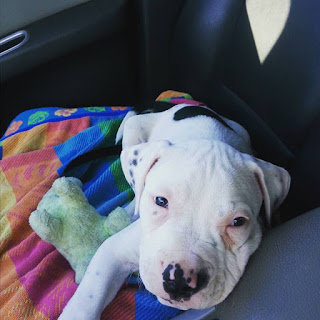 Winston does well on car rides and joining mom at work 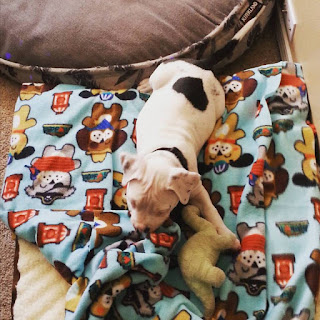 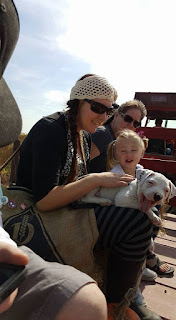 Bella loves Winston and he loves her back. These two were loving on each other on the hay ride.

Tyler and I are planning to raise Winston a bit different than Kitty. Kitty is a sweet dog at home but get her out in new environments and she gets very distracted. We plan to keep working with her (she is never too old to give up on training) as well as hopefully prevent Winston from following in her footsteps. So we are socializing him as much as we can, around people of all ages, and with lots of other dogs. We also plan to take him with us wherever we go as much as we can. In addition we plan to crate train him too so when we are not around, he has that stability. I have never had a puppy before and I am so glad I was older and more mature before I decided to take on this endeavor! Plus I am so glad we do not have kids! It will be nice to not have a brand new puppy when we embark on that adventure.

Have you ever raised a puppy? Any tips?