By Unknown - September 06, 2014
Before I talk about the bachelorette party, I want to talk about the morning of the shower day. We went and got pedicures! The whole day was planned with fun activities for me and the ladies in my life and what better way to start then with pedicures (especially after a little early morning run!)!. After the pedis we had lunch at Bardenay's in Eagle, which was yummy. It was nice just to get together the 5 of us before the big events later on in the day. 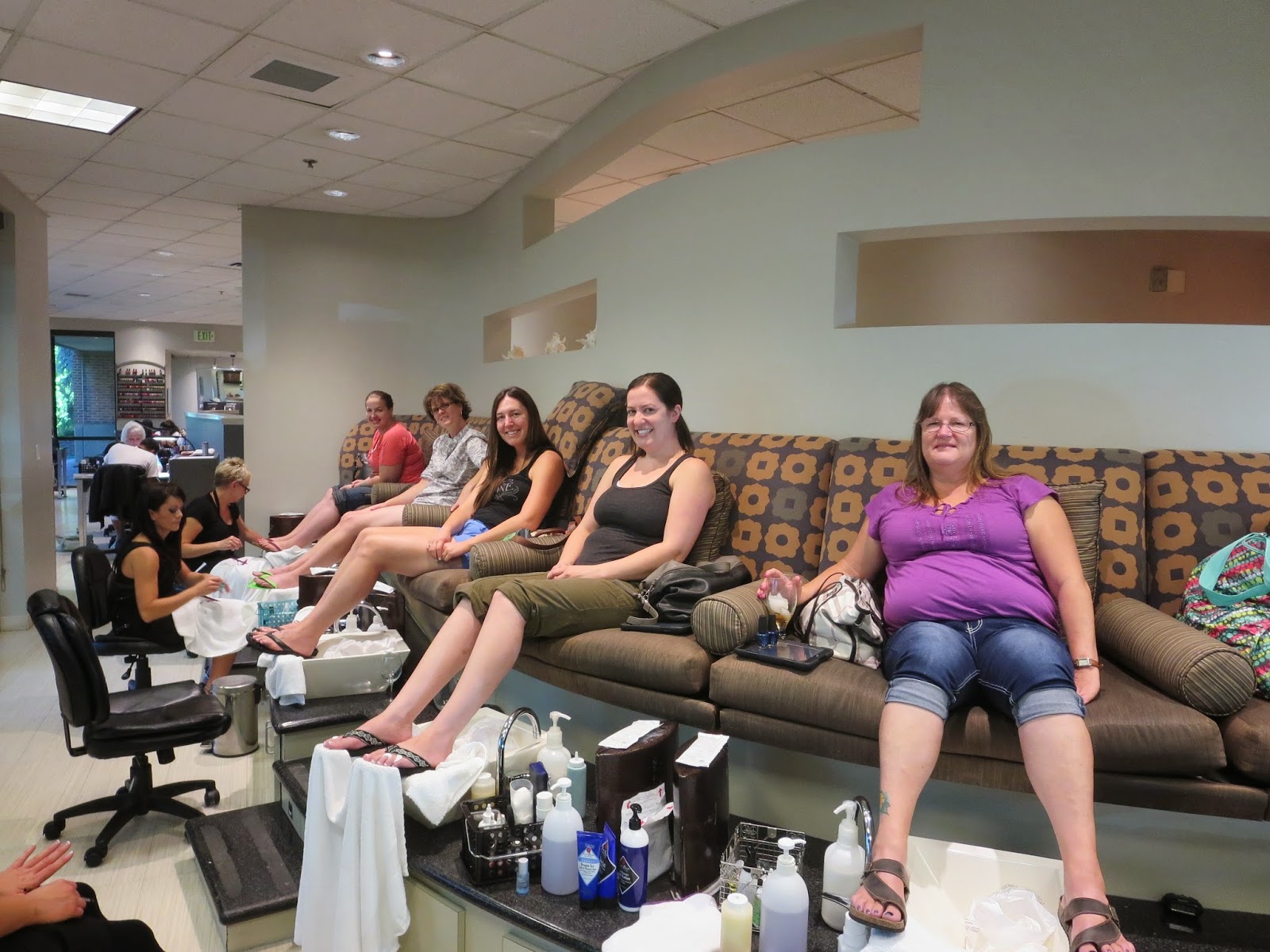 Now on to recap one of the funnest girls' nights I have had in a long time! A couple of hours after the bridal shower we transitioned to the bachelorette party. I have had a couple of people ask why we did the shower and party so early and why they were on the same day. As many of you know, I have been a bridesmaid a LOT and I have picked up a couple of ideas along the way. First, being a bridesmaid or maid of honor is a LOT of work! It's expensive too and requires some sacrifice because you want everything to be just perfect for the bride. My maid of honor is from out of town as well as members or my and Tyler's families. My thought was that if we chose a date that was on a three day weekend most people would have Monday off and travel and time off work would be easier. Also, it was enough time before the wedding that it wouldn't feel like they were coming back right away for the wedding. Since there were some out-of-towners, I also thought having both parties on the same day made sense. People have told me the wedding is about me and Tyler and we shouldn't worry about others but come on, it's about our loved ones too. At the end of the day everything should reflect Tyler and me- yes, but we would rather spend those important moments with the people we love most, so it's got to be about them too. So, I hope that everyone that made it had fun and I think it all worked really nicely doing it just the way we did.

Jessica, Cherie, and I headed from the bridal shower and did mad dashes to our homes to grab our makeup, hair stuff, and wardrobe changes, and headed to Jessica's parents' house to get ready. Jess fed Brynn, gave her some love, we all changed, and then it was time to head to 10 Barrel. As you know, this wedding has a beer theme so I requested we look at having dinner at a brewery. 10 Barrel is downtown so I thought if we decided to do something after, we were in the perfect position to do so. There ended up being 12 of us girls in total, which was the perfect size. We had dinner, we had penis straws, Jess got me decked out in bride attire-thank you so much for doing just the right amount! and drank a decent amount of beer to get a buzz on. 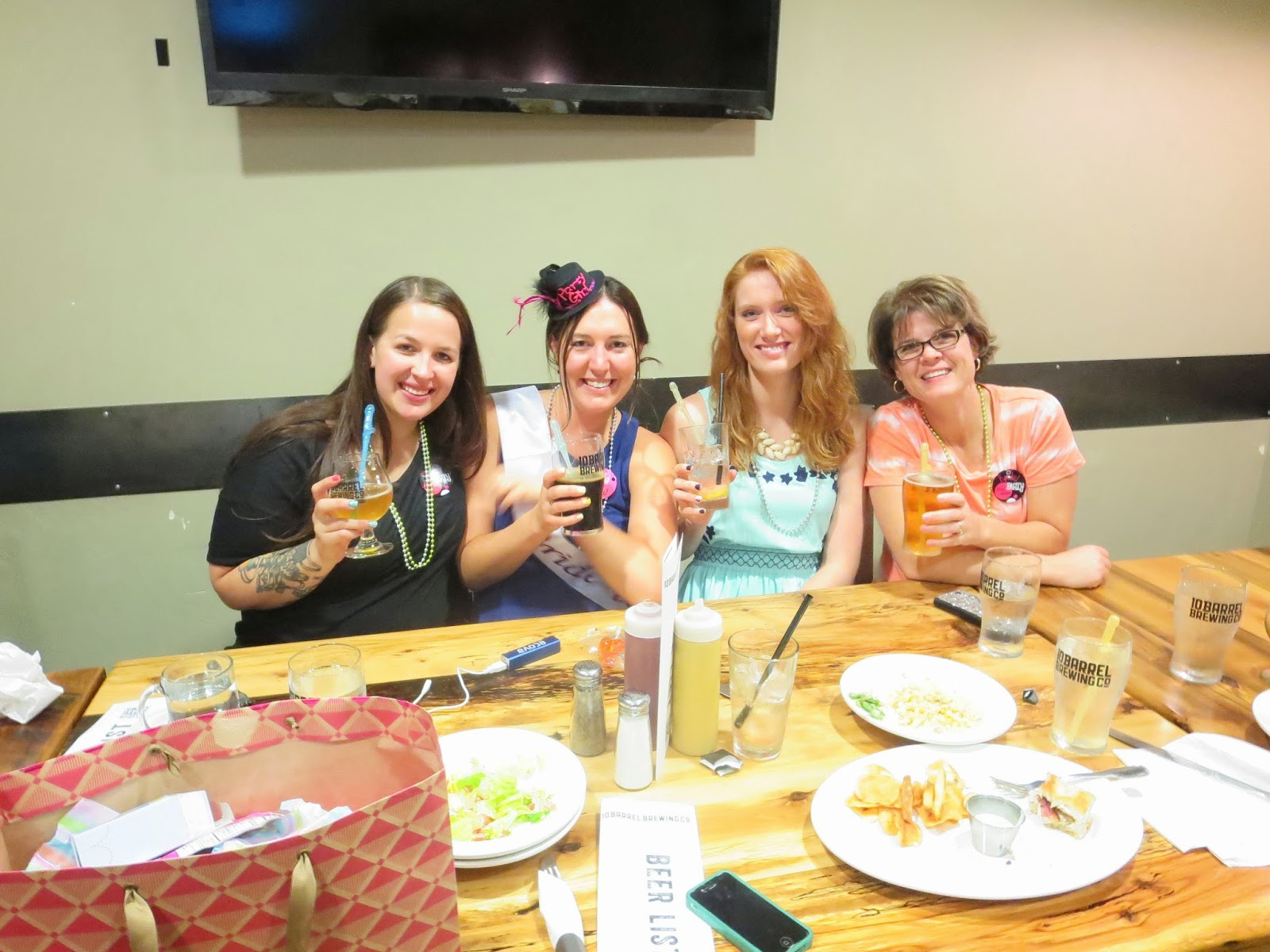 Drinks with my cousins! Kayla on the left, me,Cherie and Danyel 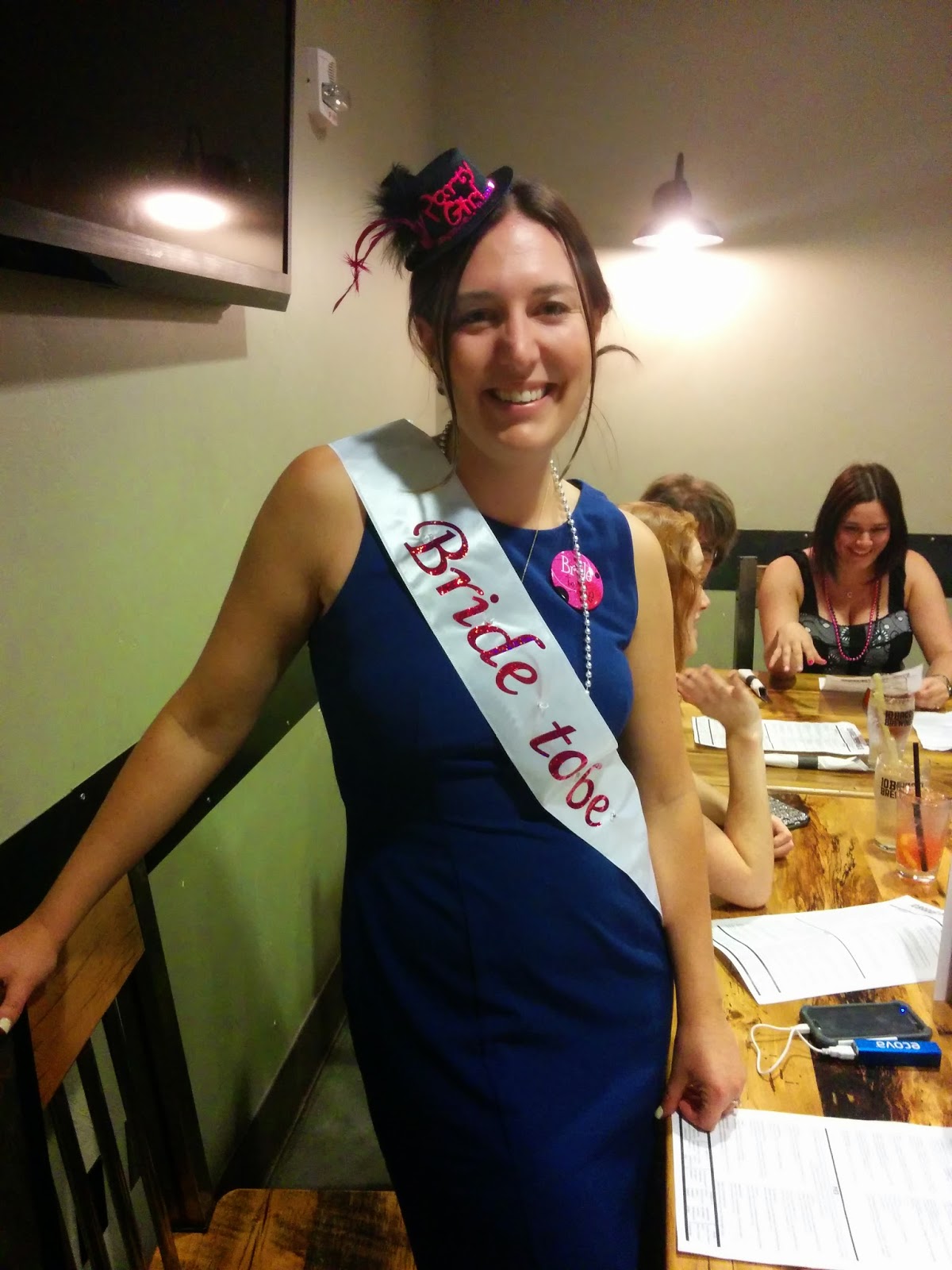 Jess bought a photo album and a matte for all the girls to kiss with their choice of lipstick. We then wrote our names under lips so we knew whose they were. Then we took this photo to put in the middle of the matte: 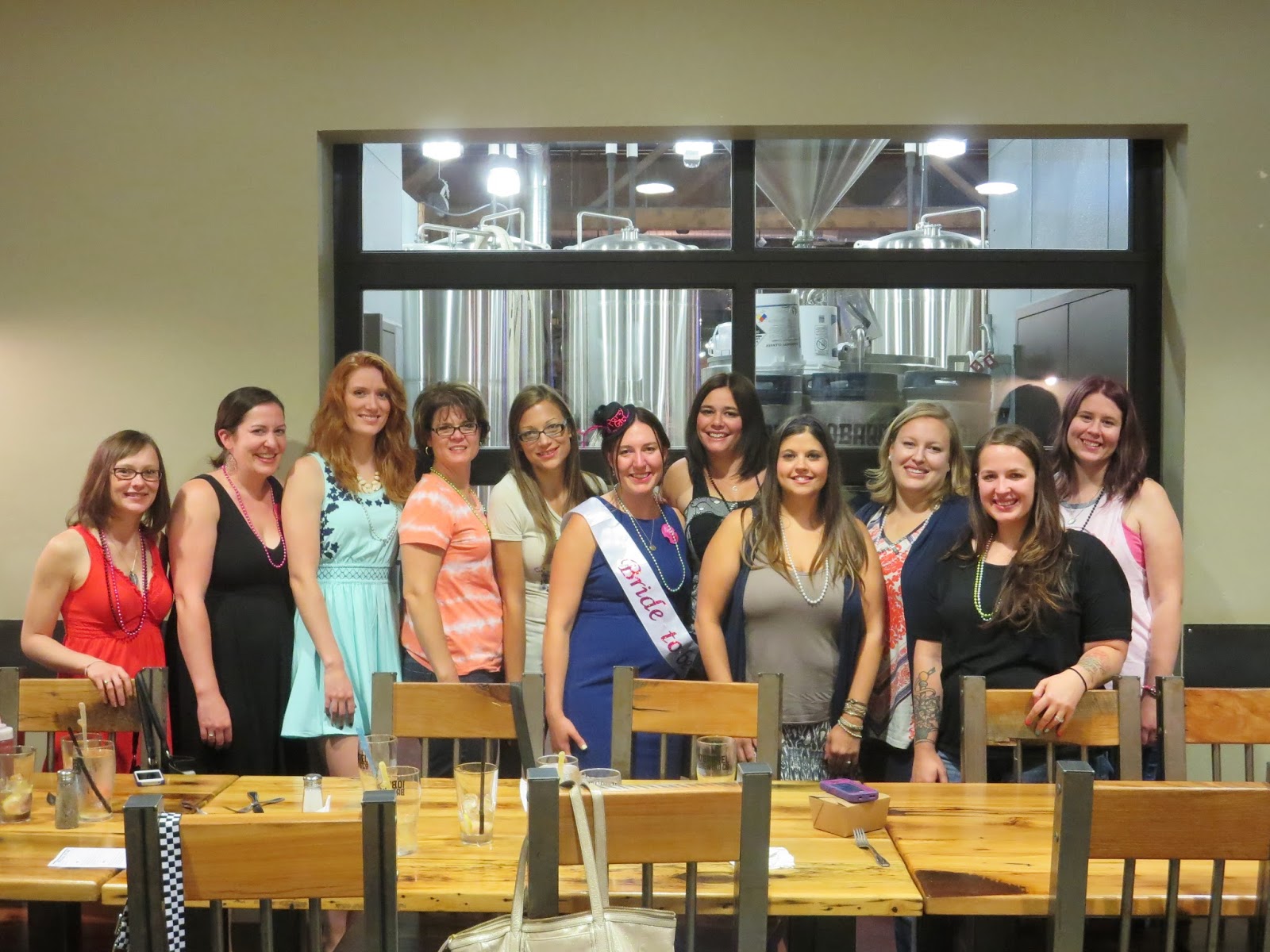 Once I was feeling my buzz I got a little nostalgic about all of my friends (including my family who are also my friends). I just was thinking about how these ladies have been there for me throughout different sections of my life. Danyel has known me since I was born, Kayla was the first younger cousin I played with and soon became almost a sister since she was always playing with my brother and me. Cherie was really the first baby I ever babysat and I have so many memories of her growing up. Melissa and I have been friends since sixth grade (I swear our friendship has theme music because whenever I think of you a myriad of songs come to mind-I Want You by Soundgarden being one that just popped in my mind). Elyse, Kristin, Aubrie, and Jessica and I all met in jr high. We actually all were in choir in 7th (except Jess, she started to go to Fairmont in 8th grade) grade but became friends outside of that class too. Jess and I became close after a choir trip to Seattle, bonding over Princess Bride. Then we were roommates in college for 3 years. Carey and I met through Alison and spent a lot of time in my early 20s partying it up and  then traveled to Europe together after we graduated college. And last but not least is my friend, Shelley. We met through Tyler and her husband, Kaz, when they started working together. We quickly found that we have a love for board games, beer, bad movies that we like to make fun of, as well as running and eating healthier foods. There were some other friends that I really wish could have been there but alas, life happens right?

From there, we started to walk to the Silly Birch, which I know as the Hangar since that's what it was when I used to frequent downtown. Jess and I got one last shot before we had to part ways: 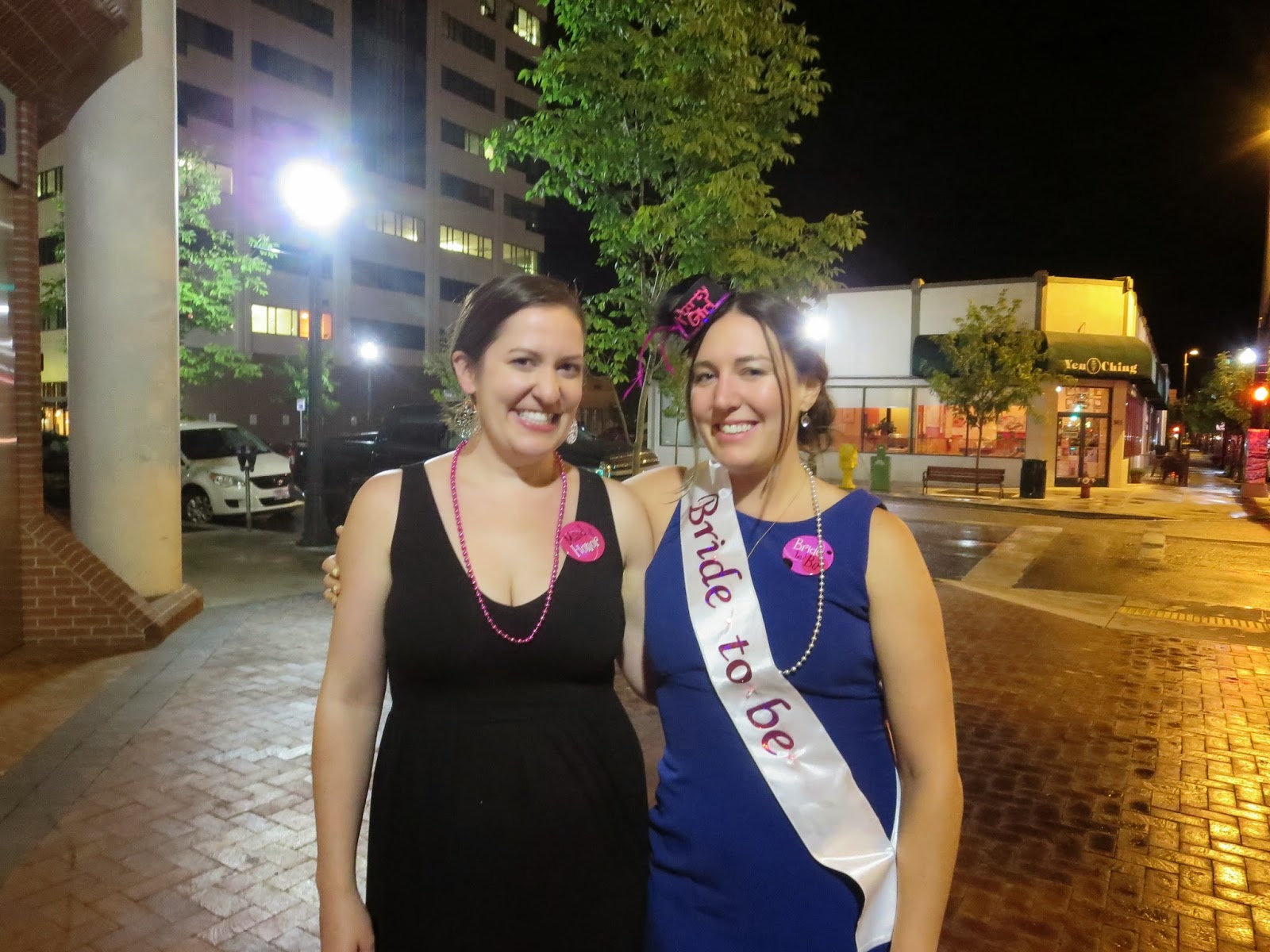 When did we get so grown up (not to mention super hot! Remember when we lived off Park Center when we were 21 and used to get cab rides downtown... memories)?

We got to the bar, had a shot, drank a beer, hung out, then decided it wasn't quite the scene I was looking for. We lost a few of our party and those that were left headed to China Blue. Now, I know what you are thinking-gross right? Well I happen to know the guy (kind of, he more knew my brother, which is kind of the story of my life) that decides who goes to the VIP upstairs section, so we headed up there, got a free bottle of champagne, and found a nice, quiet booth area to sit and hang out. Carey requested a Britney song so I could get my dance on, which he quickly did, so Carey and I had the dance floor to ourselves and danced our asses off to "Work, Bitch". Then there was another shot and another beer and all of a sudden it was 1230 am and only Carey, Shelley, her friend Michelle, and I were left standing. I decided if I had any other shots I knew I would be sick or black out, having another beer just did not sound good to my full stomach, so I knew I was ready to go home and join my fiance at home (who called me when en route to Silly Birch to tell me he loved me). Shelley and Michelle called a cab, Shelley and I had some nice bonding time during the drive, and then I got dropped off at home. The next morning I was hung over but it could definitely have been worse. It was just the right amount of partying for me, a girl that does not party very often, and is terrified of hangovers now that they just keeping getting worse as I age.

All in all, I had a blast! Thank you to all my friends who came out with me, for the gifts, for the drinks, for the dinner... it was perfect and I am very grateful to you all.

Now off to sew some table runners for the reception and put together some tutu dresses for the flower girls!

P.S. I bid Tyler farewell this morning when his groomsmen whisked him off to a full day of guy time-I hope you have fun honey!!!