By Unknown - July 09, 2014
Saturday we woke up early to get on the road to Glacier. Our goal was to be on the road by 8am and we ended leaving by 830 so I would say we didn't do too bad. We made our way along Flathead Lake heading towards Big Fork, Montana. We stopped near Hungry Horse for breakfast and had some super delicious food. They had several vegan and vegetarian options- I was impressed! And the coffee was super tasty-excellent choice Cynthia and Daniel!

Next we stopped at Glacier Distilling, where there was whiskey to be sampled. We caught them right as they opened and Tyler was able to check out their set up and try a few whiskeys. It was a first for me, other than trying the vodka at Bardenay's in Boise. 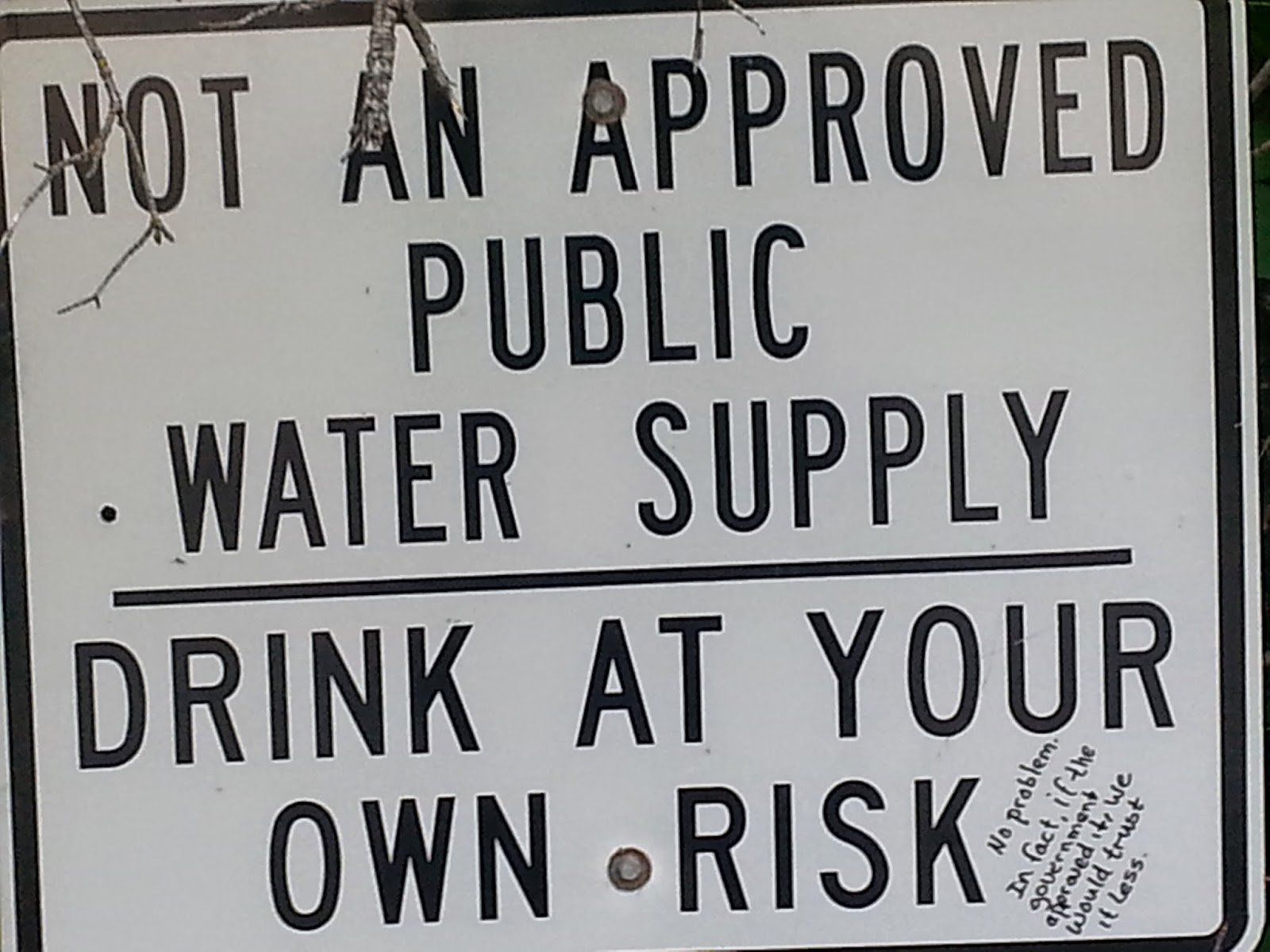 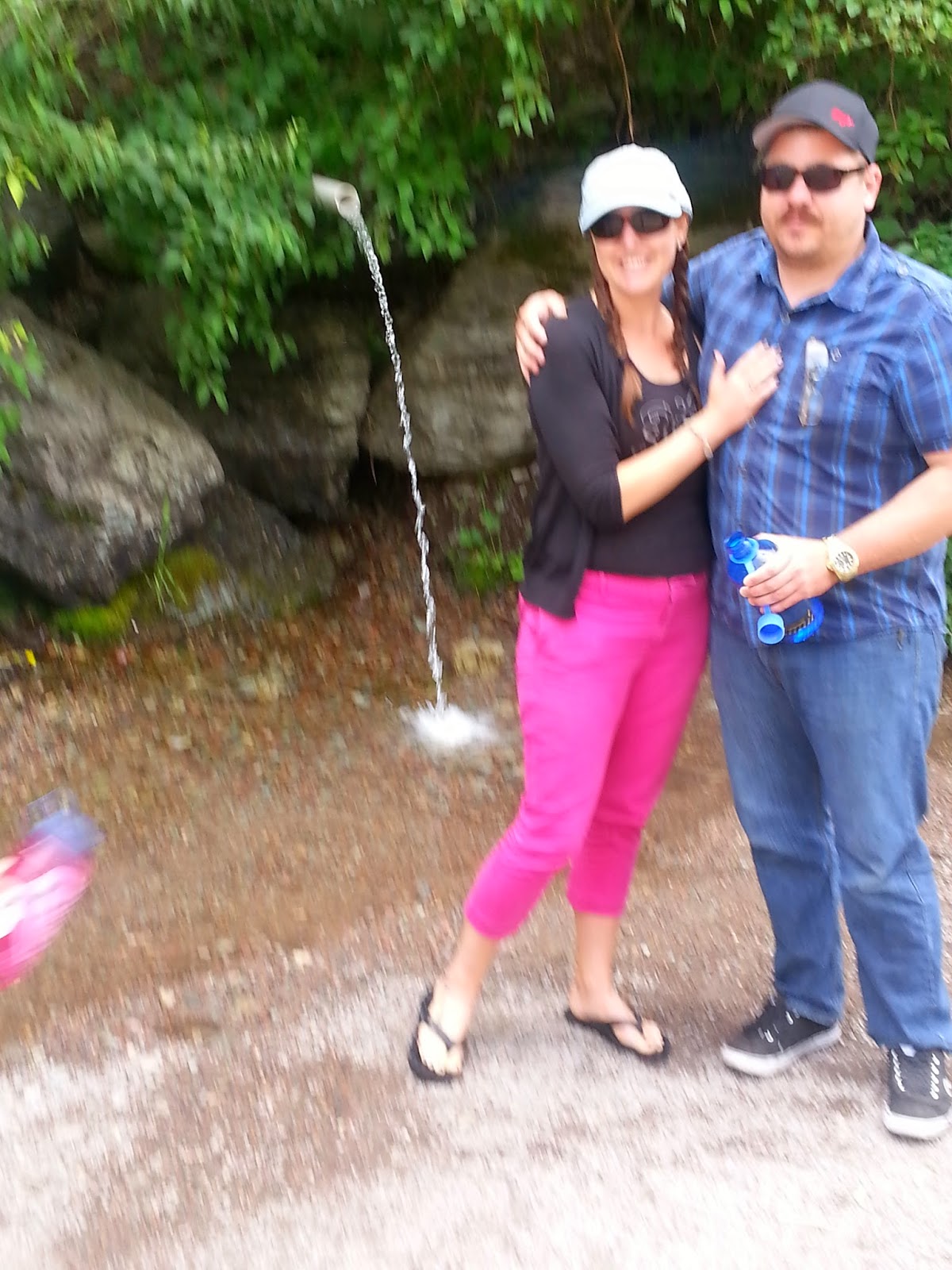 Shortly after the spring, we found our way into Glacier National Park. The entry sign was packed so we took a picture there on the way back (see below). We first stopped at McDonald's Lodge and Lake where we got our first real glimpse of the mountains. 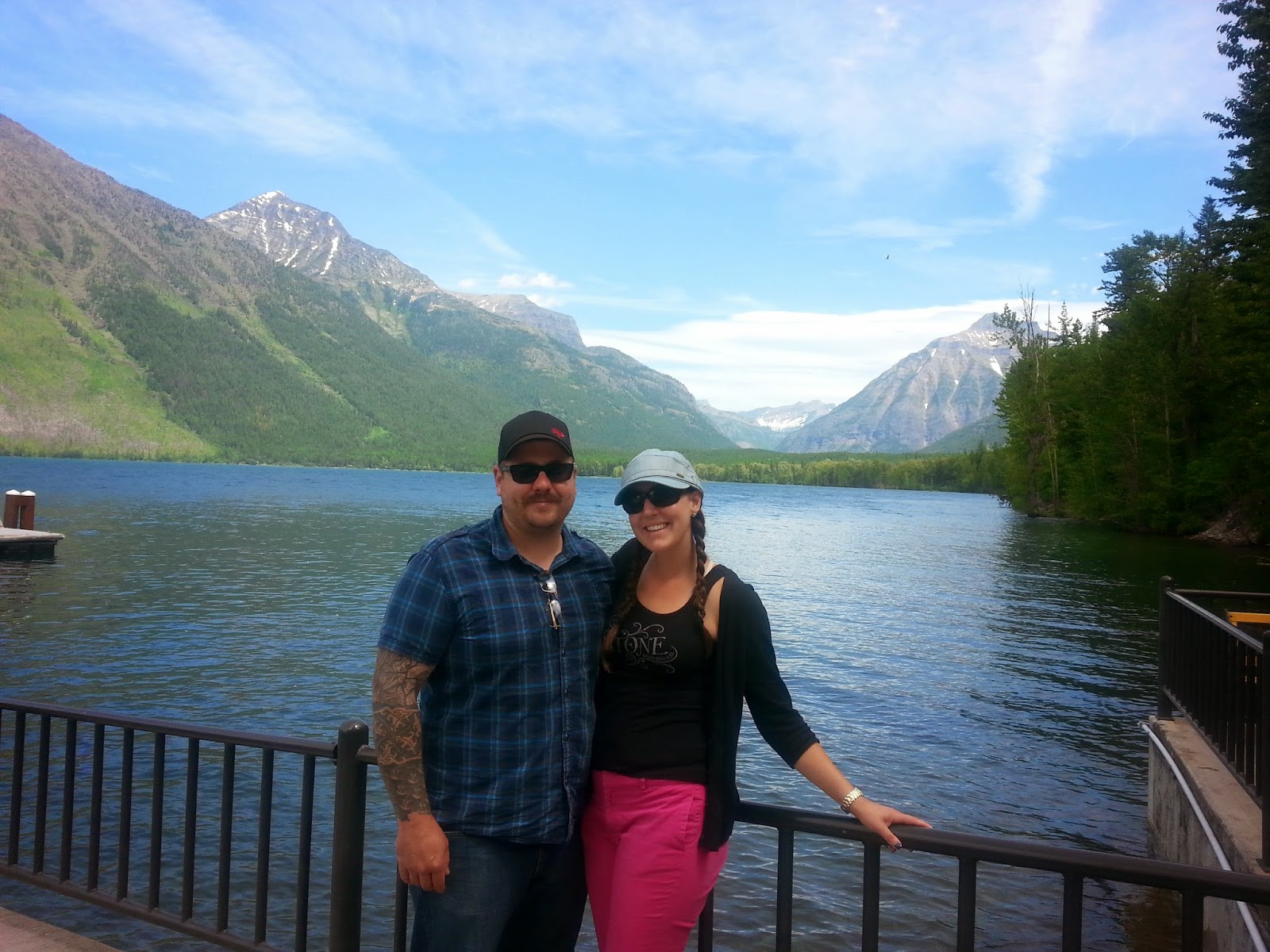 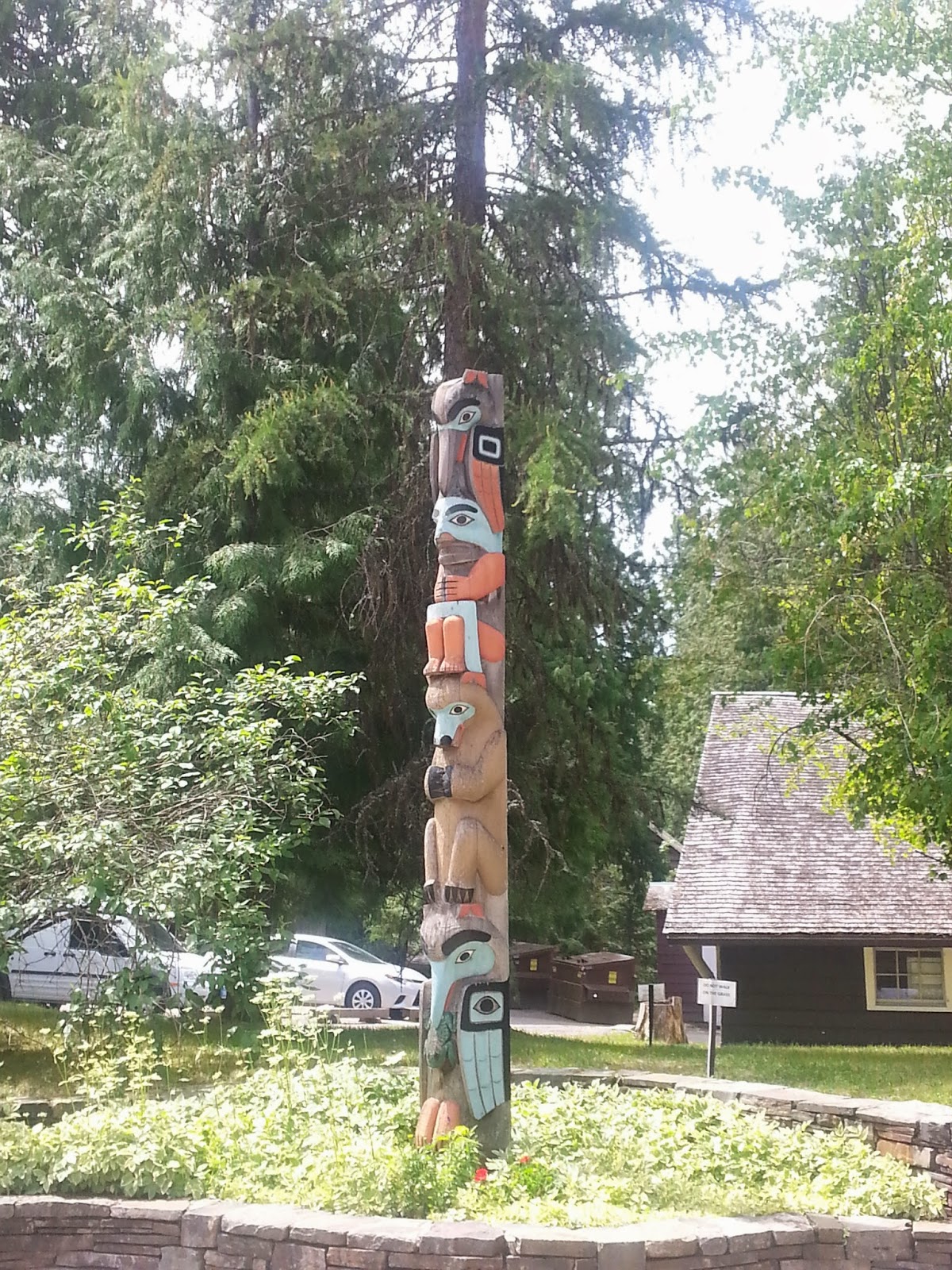 A cool totem pole in front of the lodge
The lodge itself just celebrated its 100 year anniversary. It had a massive fire place and was very rustic but in a very well-kept way. It was the first weekend the Going to the Sun Road was open so it was just packed everywhere we went. Plus the weather was perfect too!

After the lodge we made our way up to Trail of the Cedars to do our first walk. This trail was wheelchair friendly and included some really gorgeous views of weeping walls, waterfalls, giant trees, and lots of wildlife. 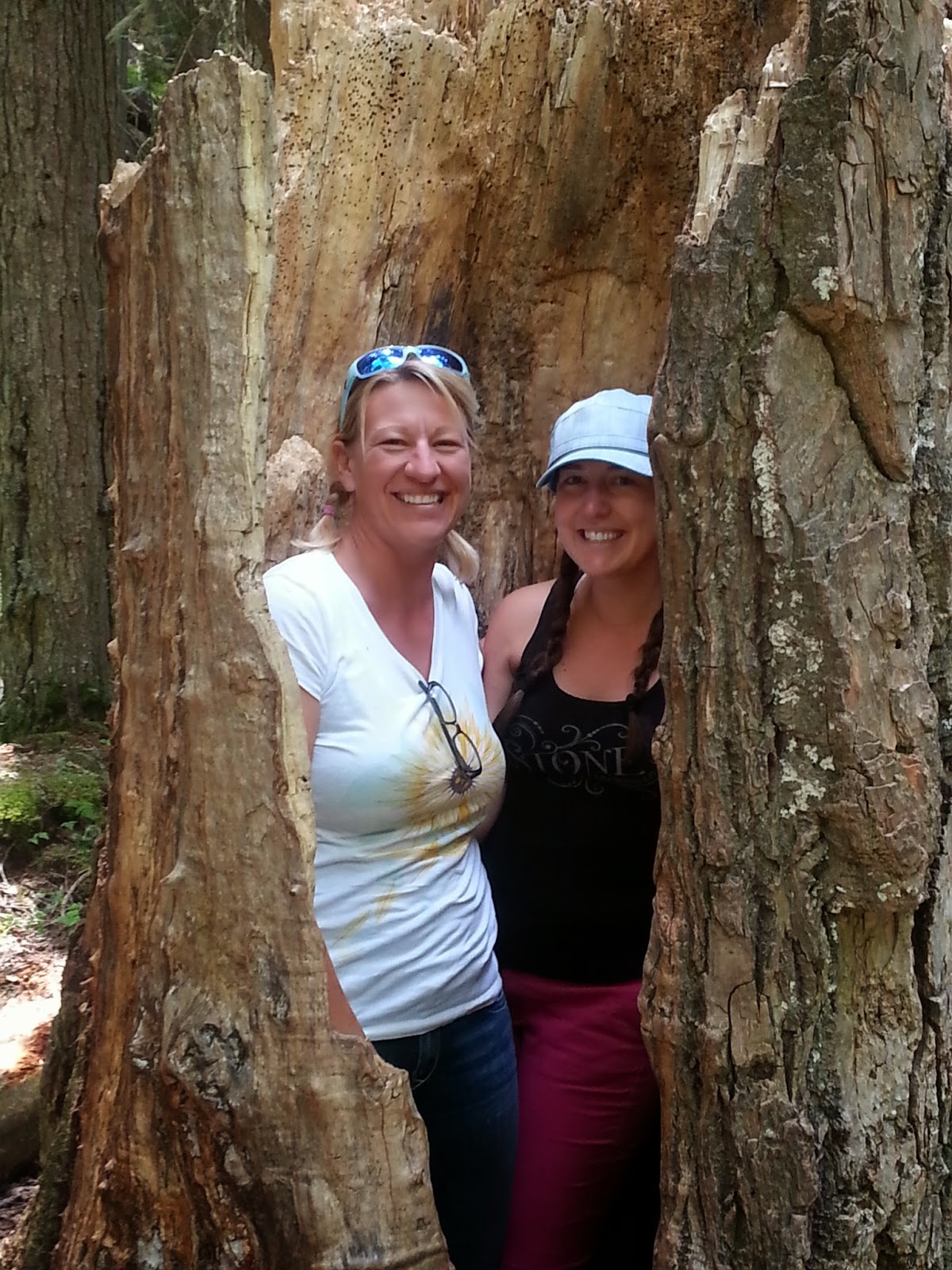 Next we started our ascent towards the sun. There were so many gorgeous views; I took lots of photos. Here are some of the best: 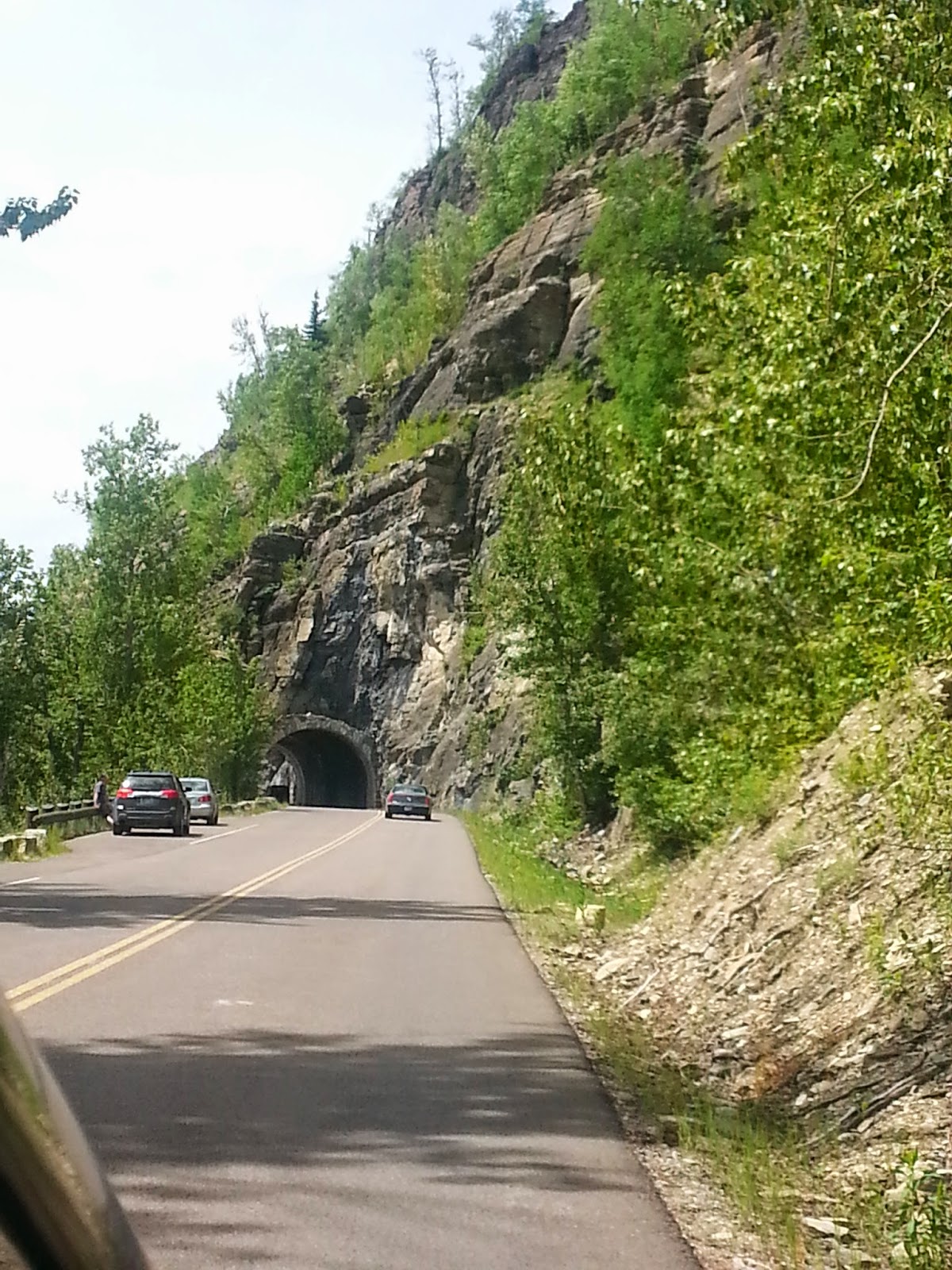 The first tunnel we went through carved out of the side of the mountain. I watched The Shining last fall and the scene of them driving up the lodge in filmed on the Going to the Sun Road. I kept hearing the music from the movie playing in my head. Ominous and awesome 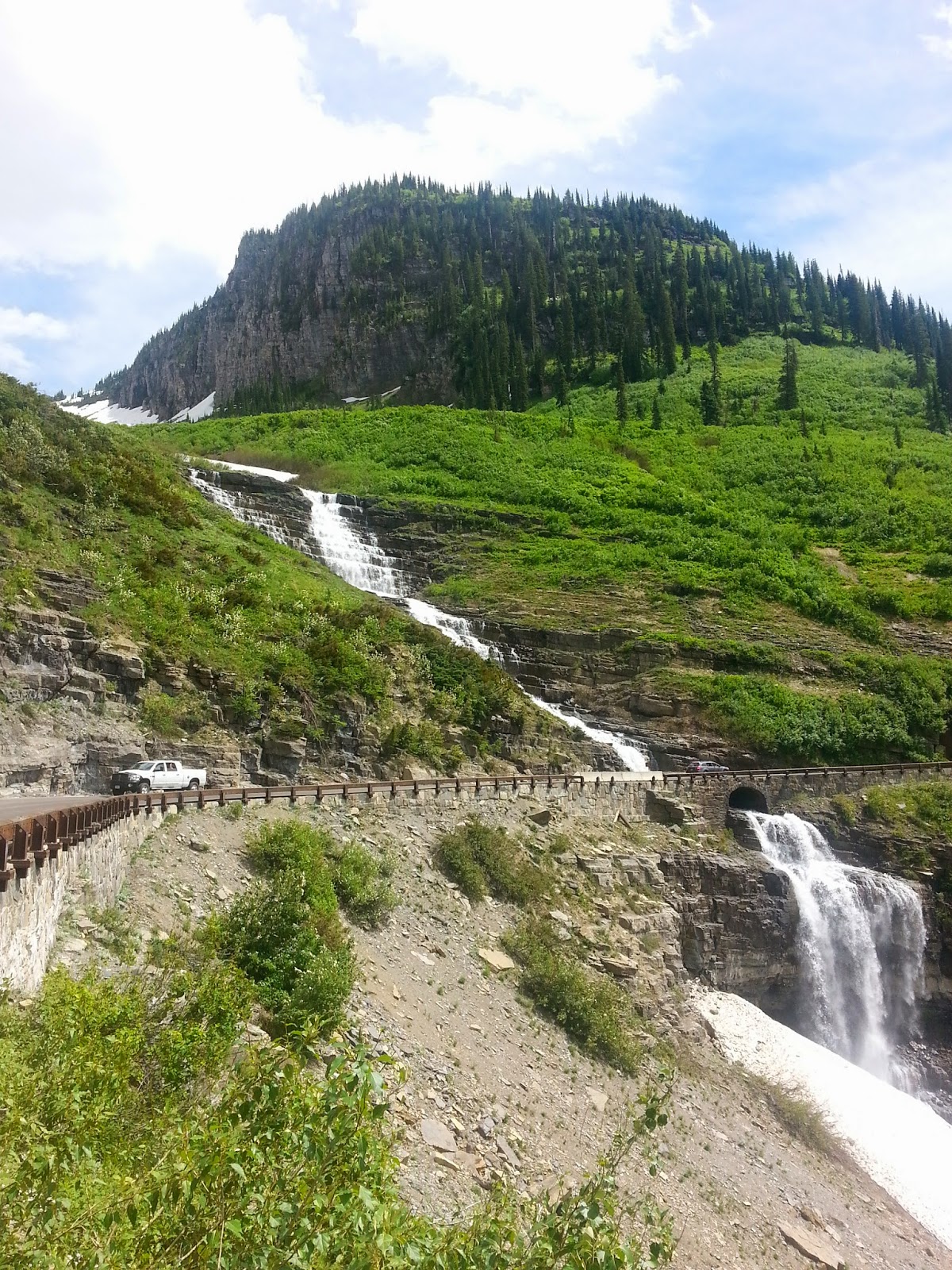 Being so early into the summer there was so much water run off! The water falls were everywhere! 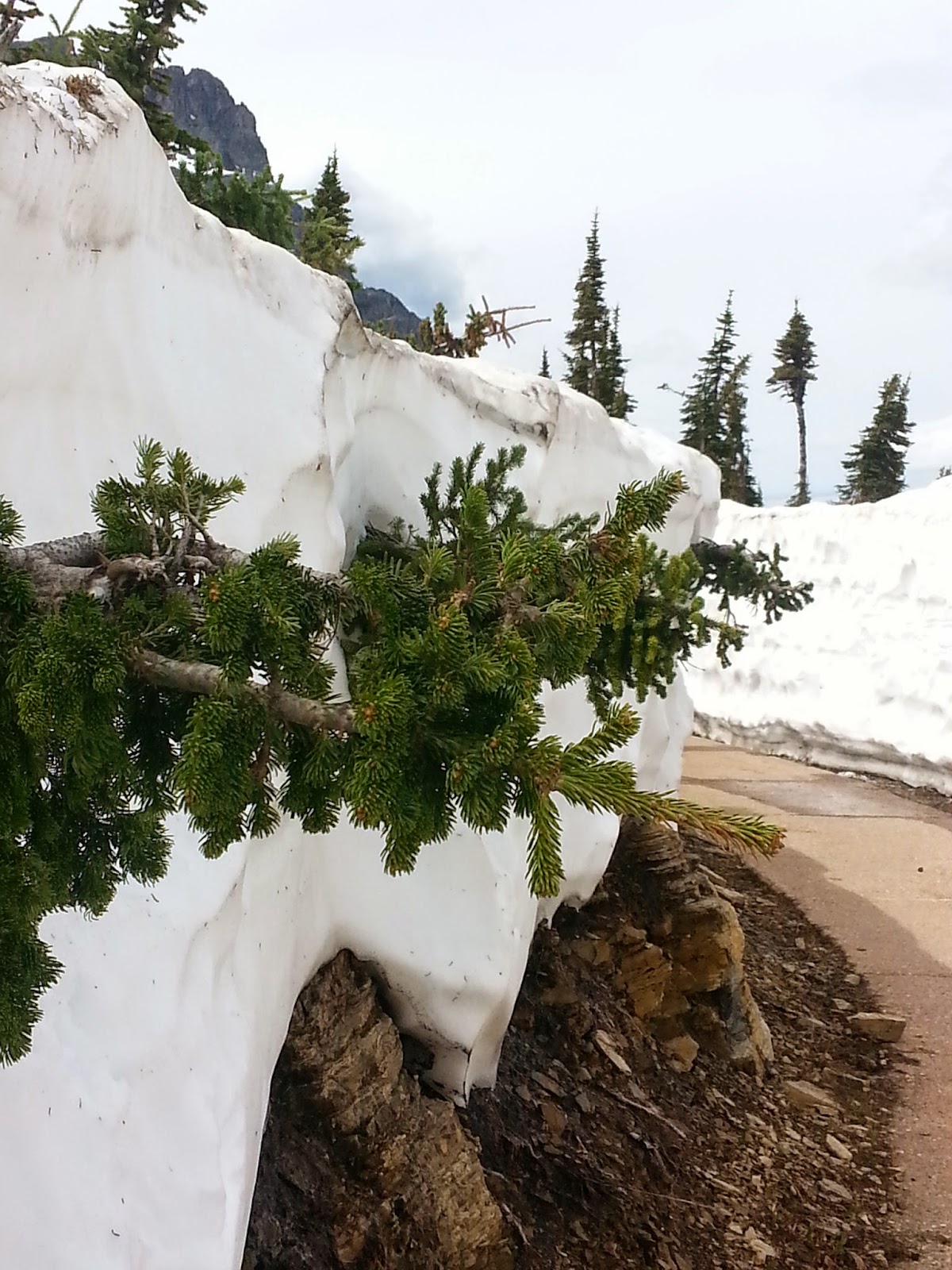 There was still a lot of snow up at Logan Pass 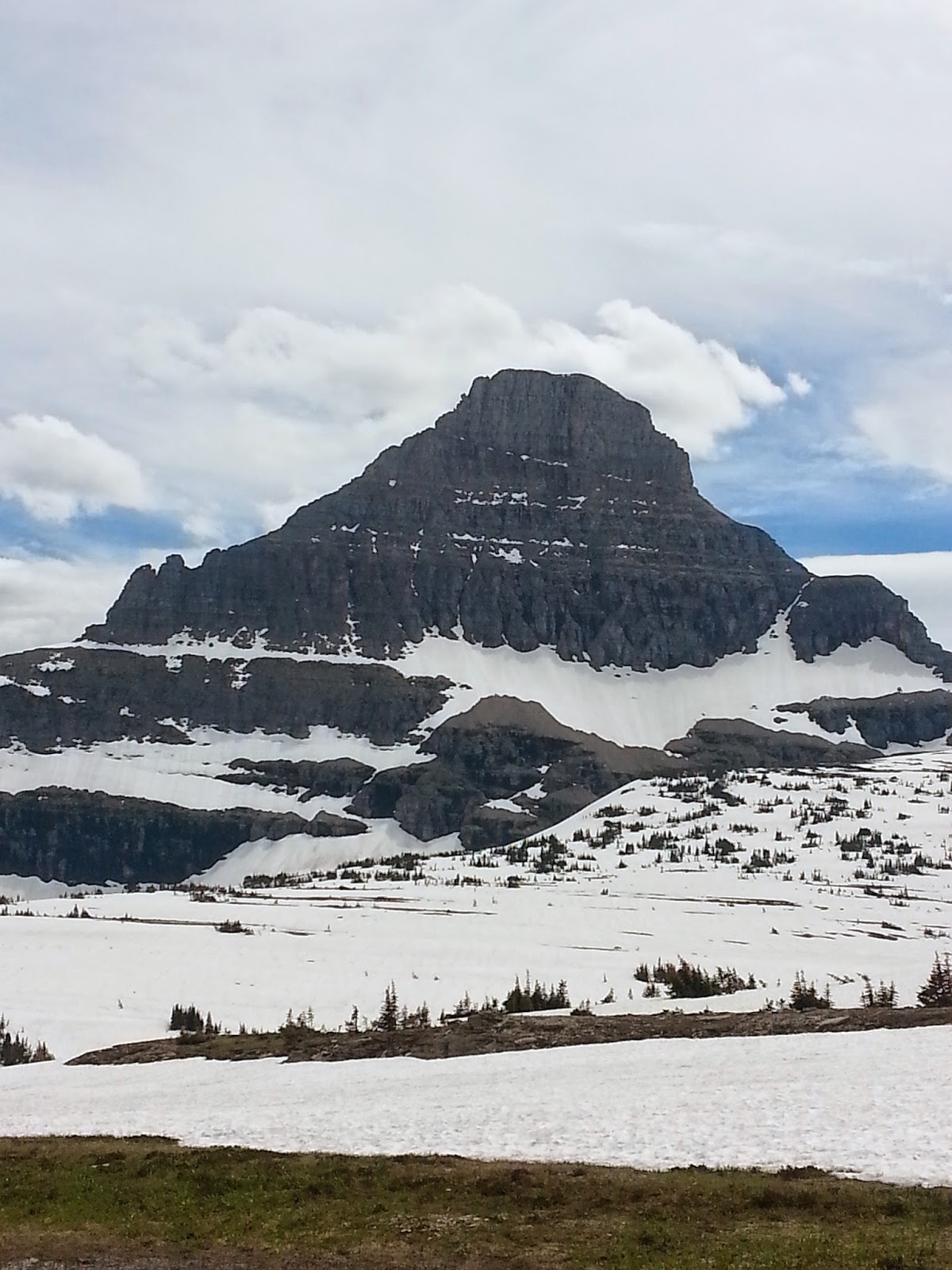 It dropped about 10 degrees from the bottom of the road up to Logan's Pass. The variety of terrain was vast but all so pretty 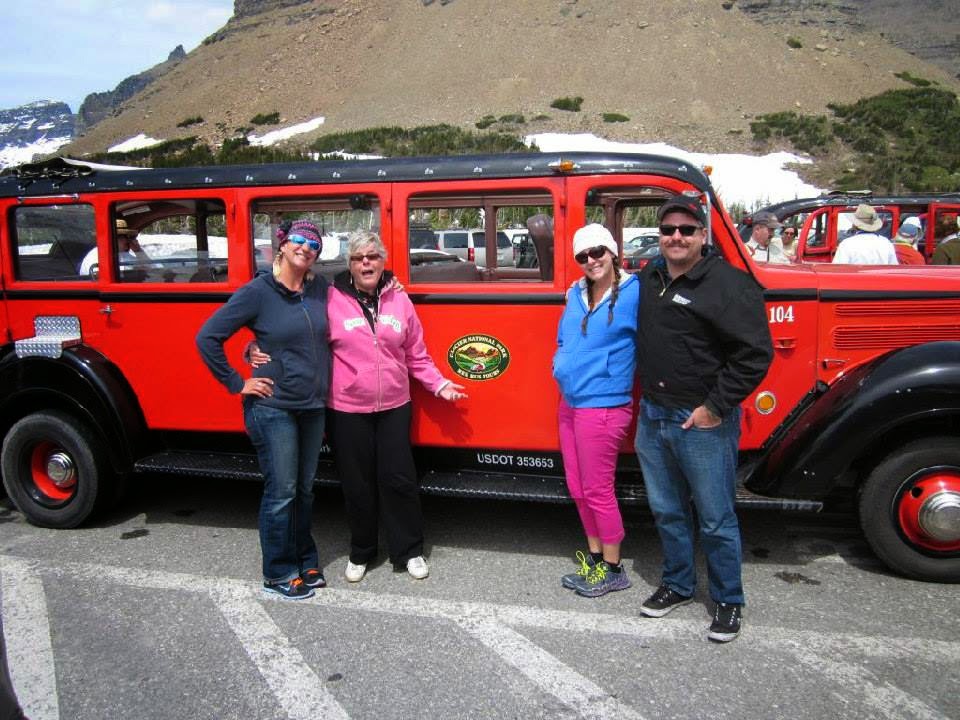 "Jammers" are these tour buses that look straight out of the 1930s, which is what they are modeled after. Ford made new vehicles that use propane to fuel these babies up and down Going to the Sun Road 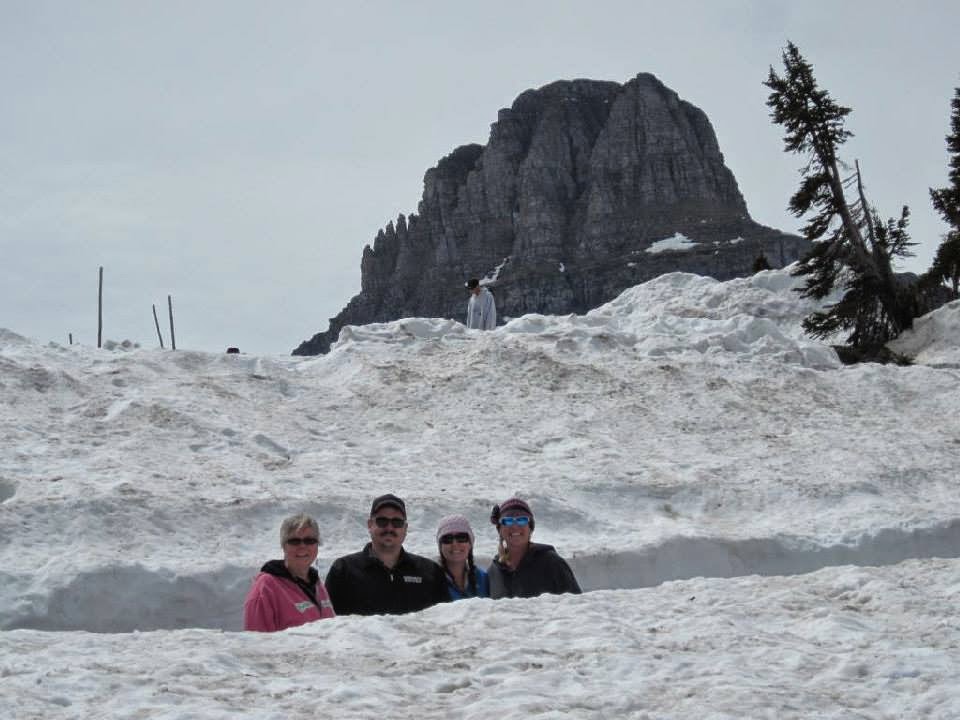 Shortly after leaving Logan Pass we saw 2 sheep climbing down the mountain. Unfortunately there was no photo but I was so happy to be able to see so many wild animals. 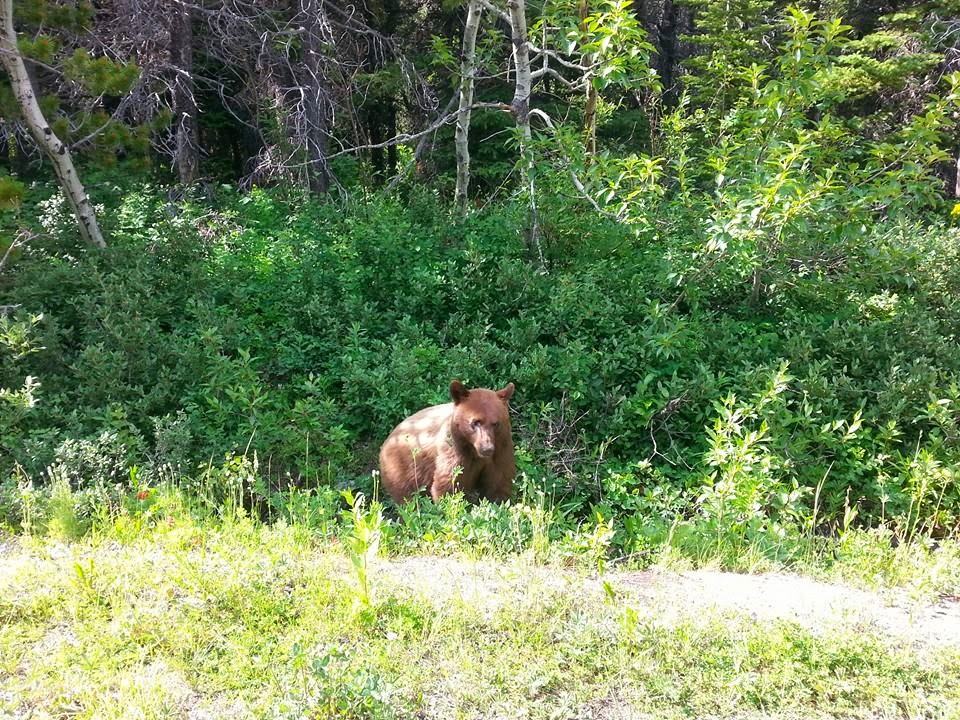 We saw a black bear on our way in. I couldn't remember ever seeing one in the wild before (my mom said I did when we were in Yellowstone when I was little) so it was so neat seeing one so close! 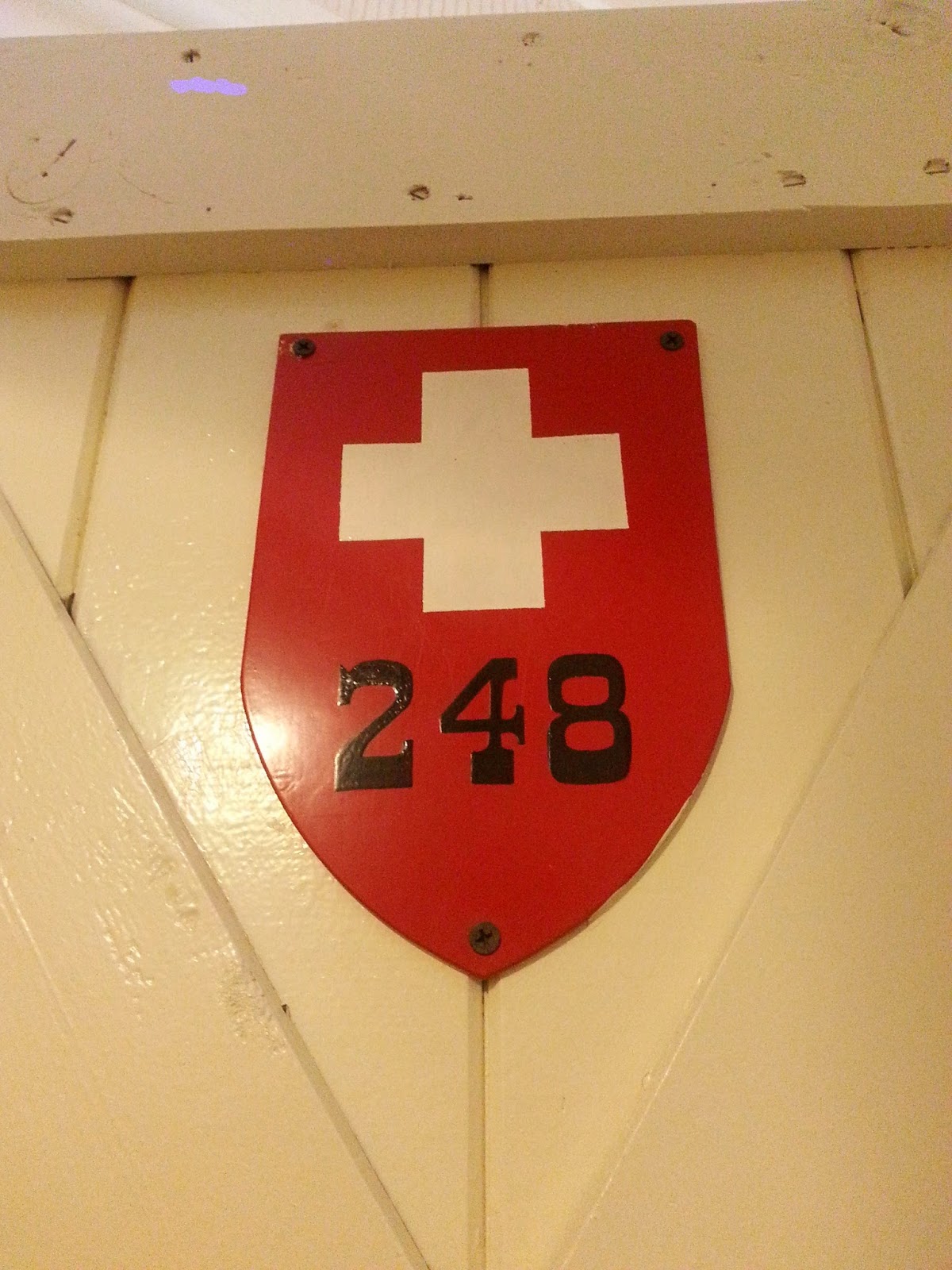 I dig the Swiss theme 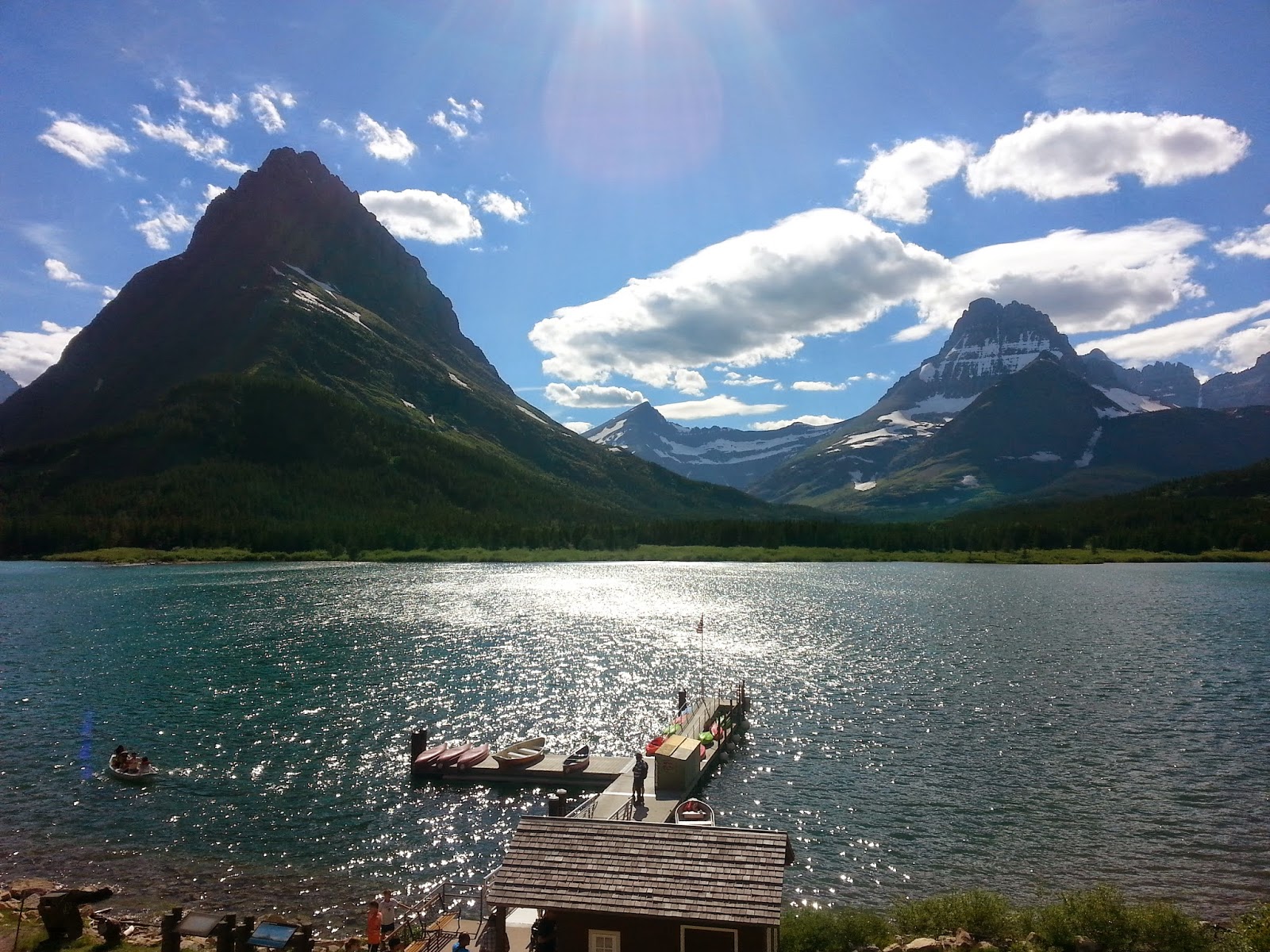 The view from our patio 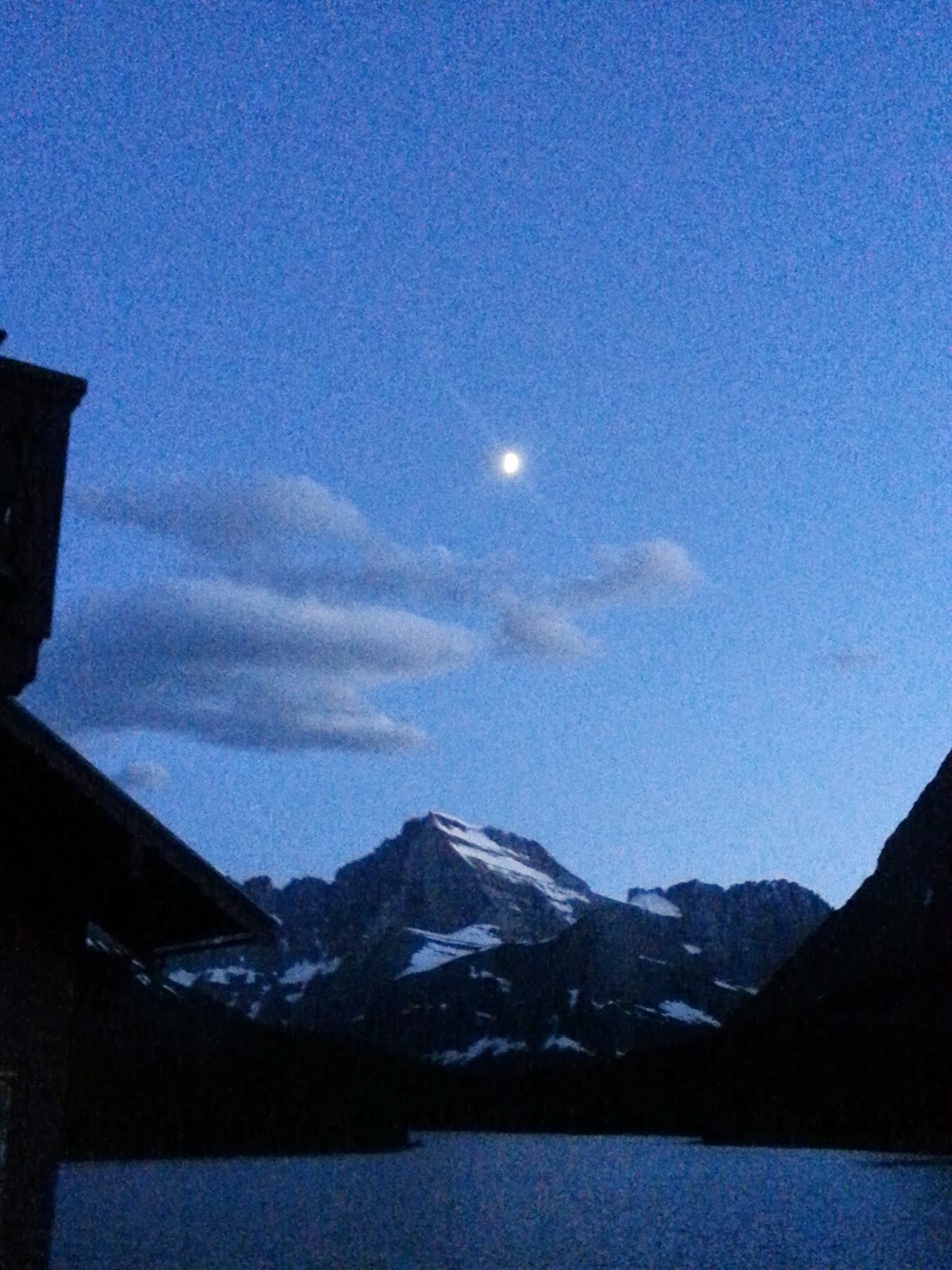 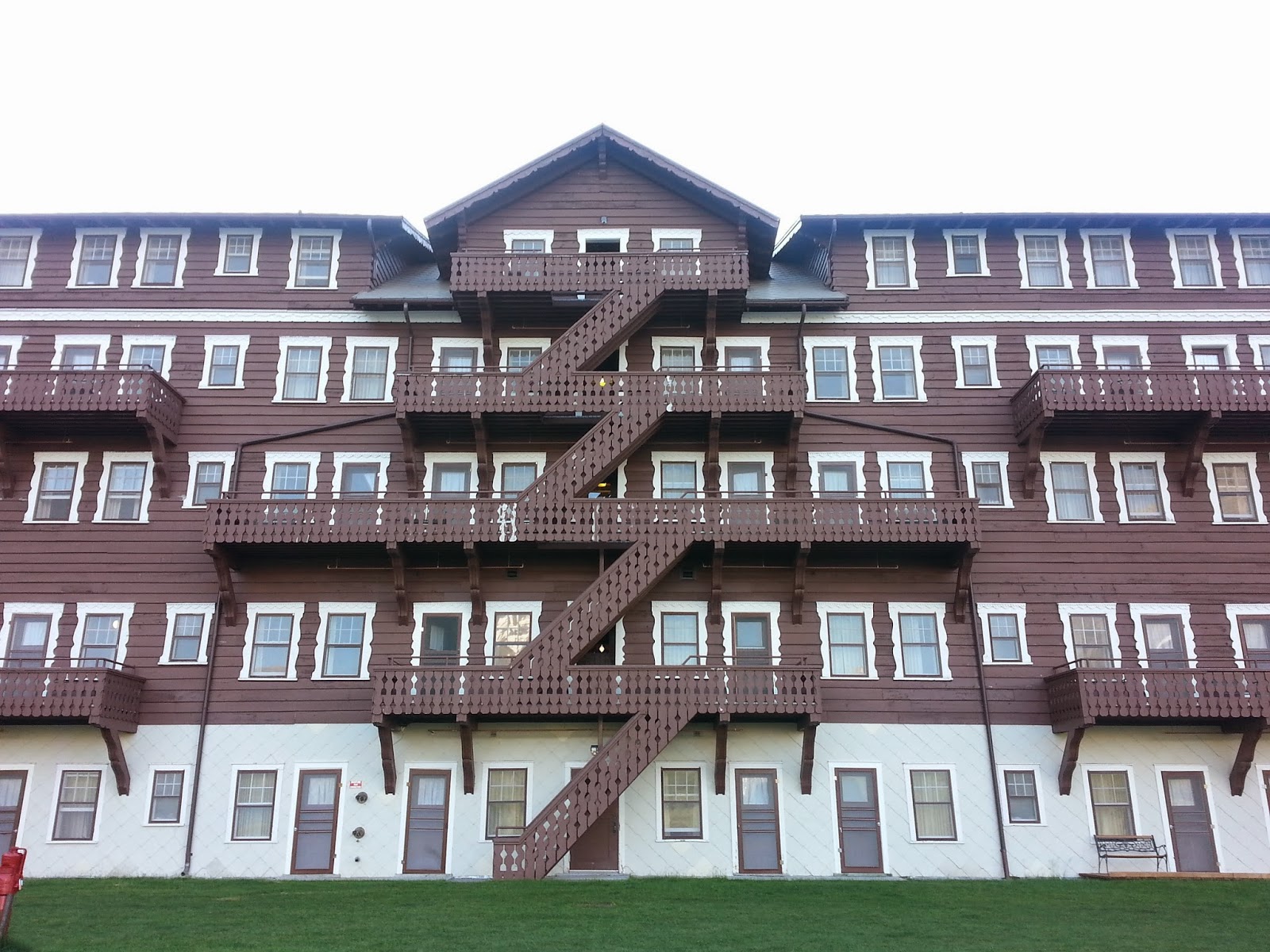 The back of the hotel at Many Glacier 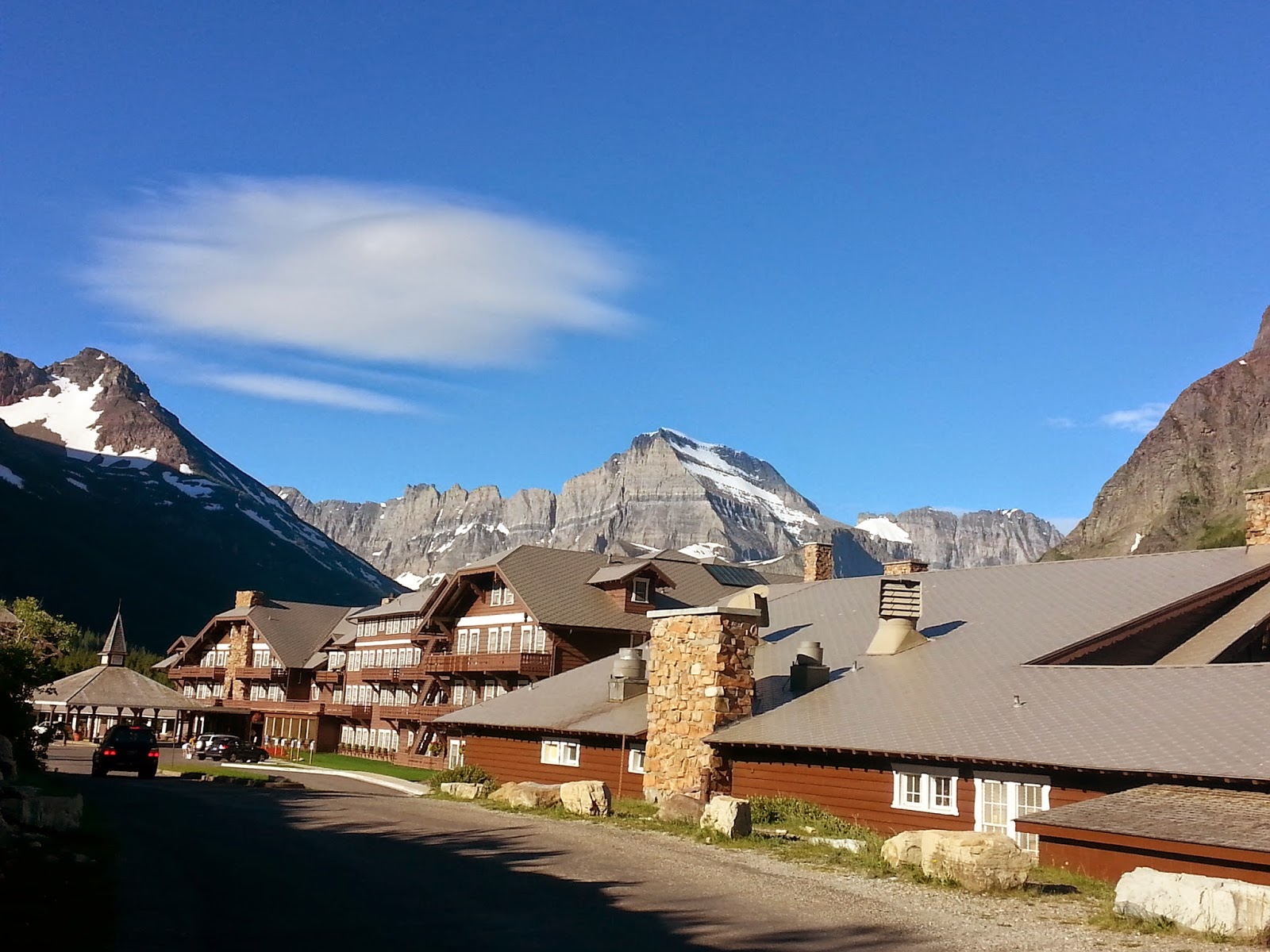 The front of the hotel 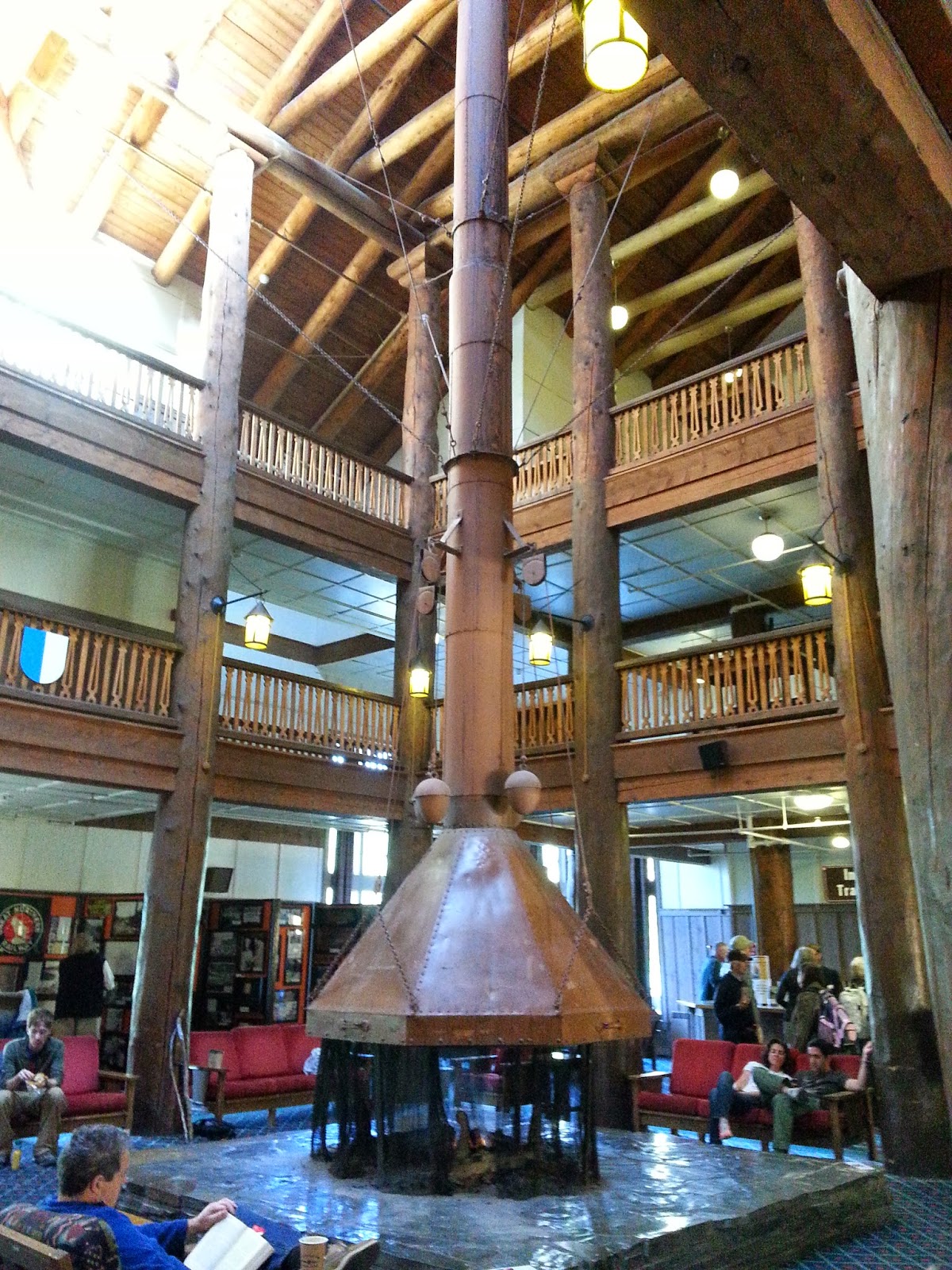 The lounge at Many Glacier 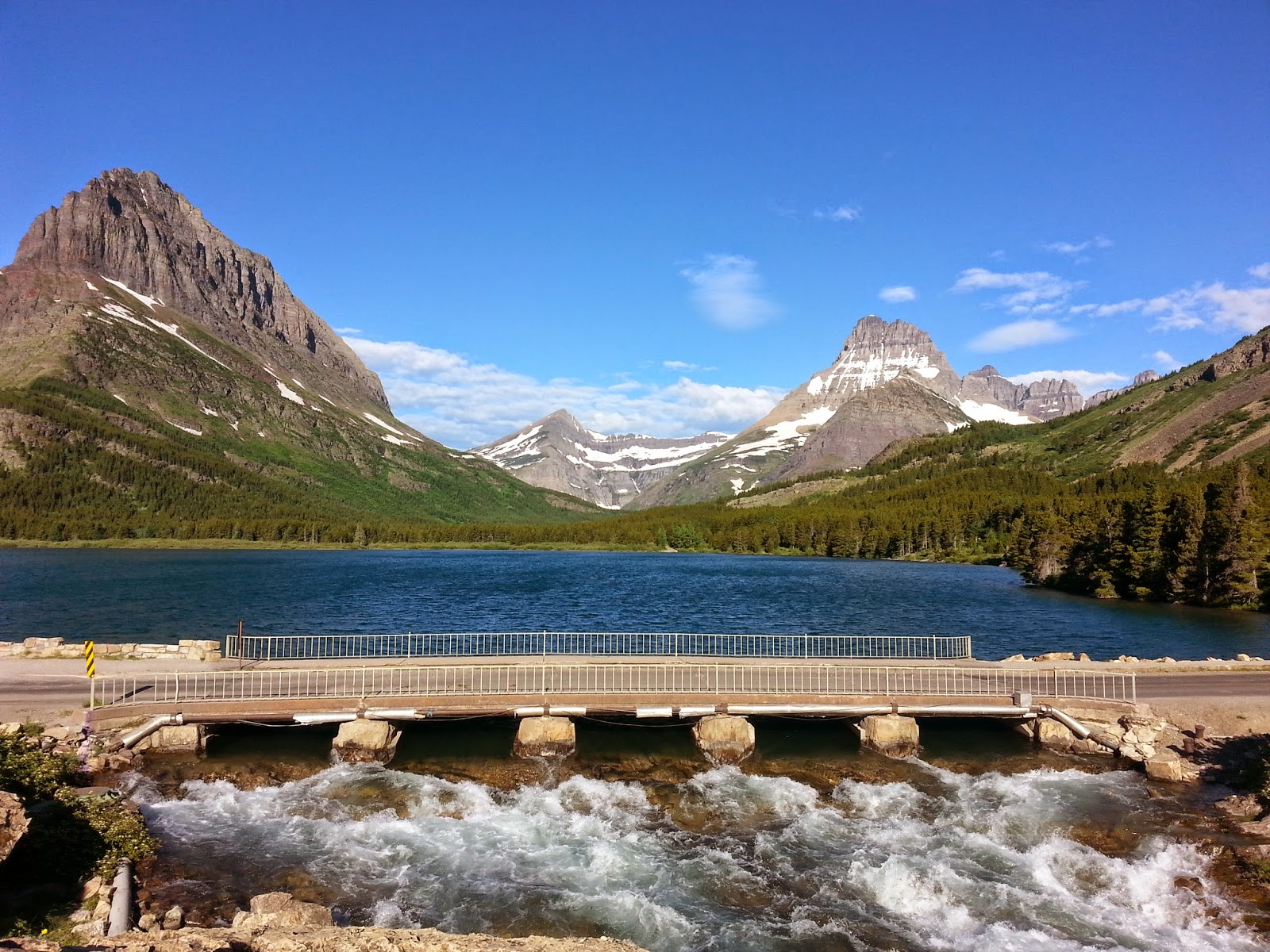 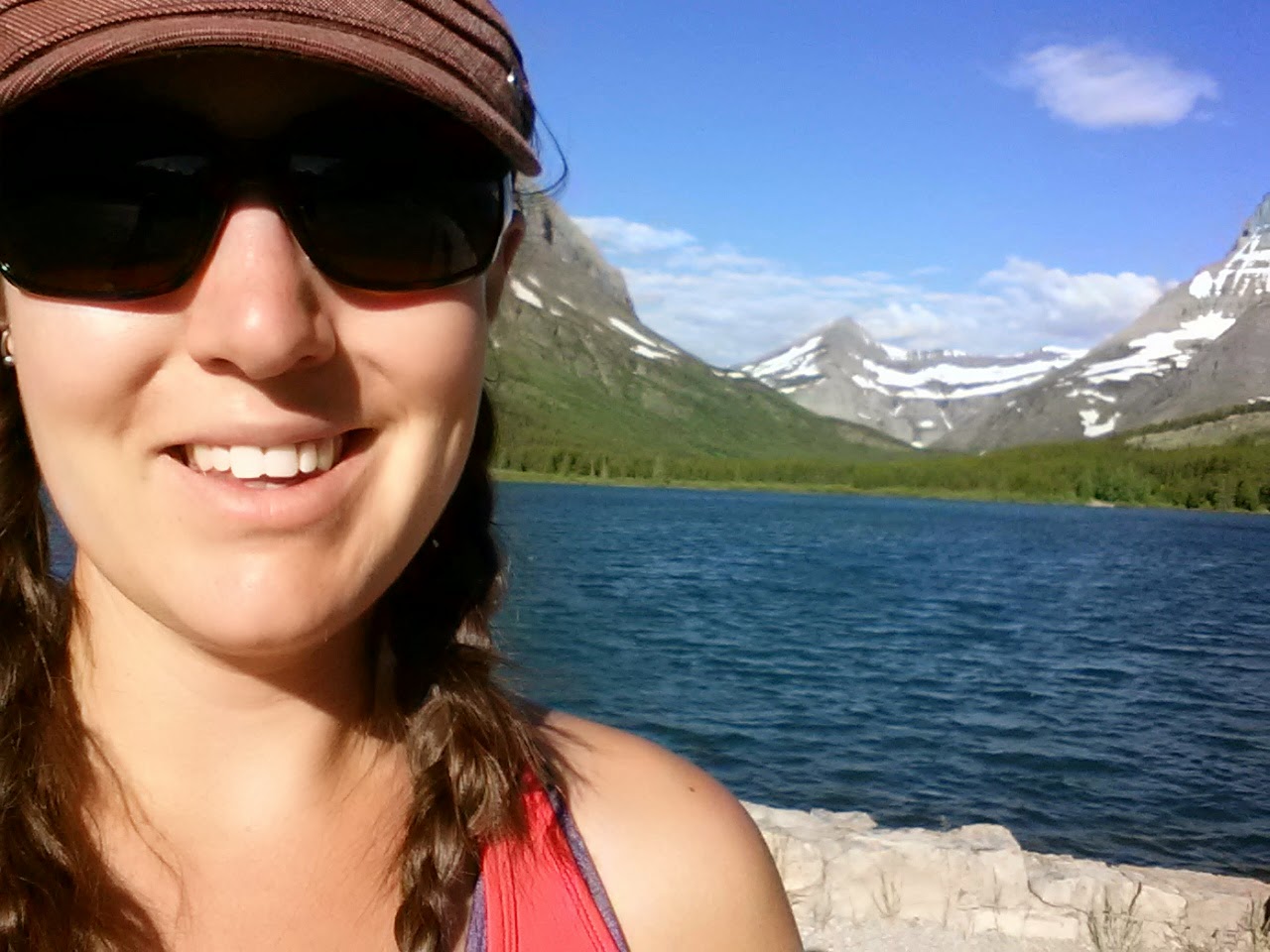 Me in front of Swift Current Lake

That evening at the lodge we enjoyed a beer on the patio before we had a yummy dinner in the lounge. We tried to catch the sun set but it was pretty uneventful. We turned in for an early evening since we were wiped from the day's activities.

I woke the next morning to go for a run. 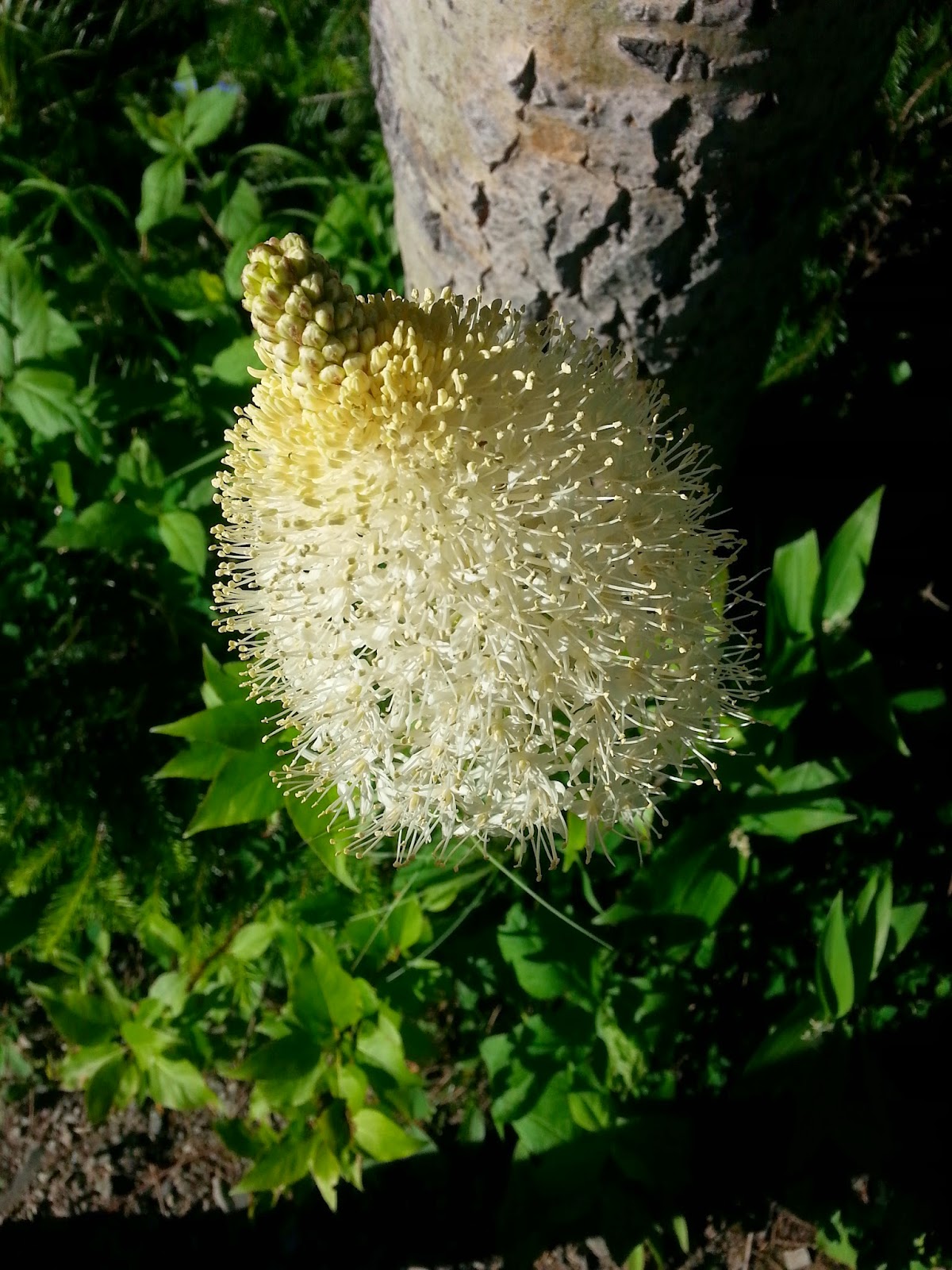 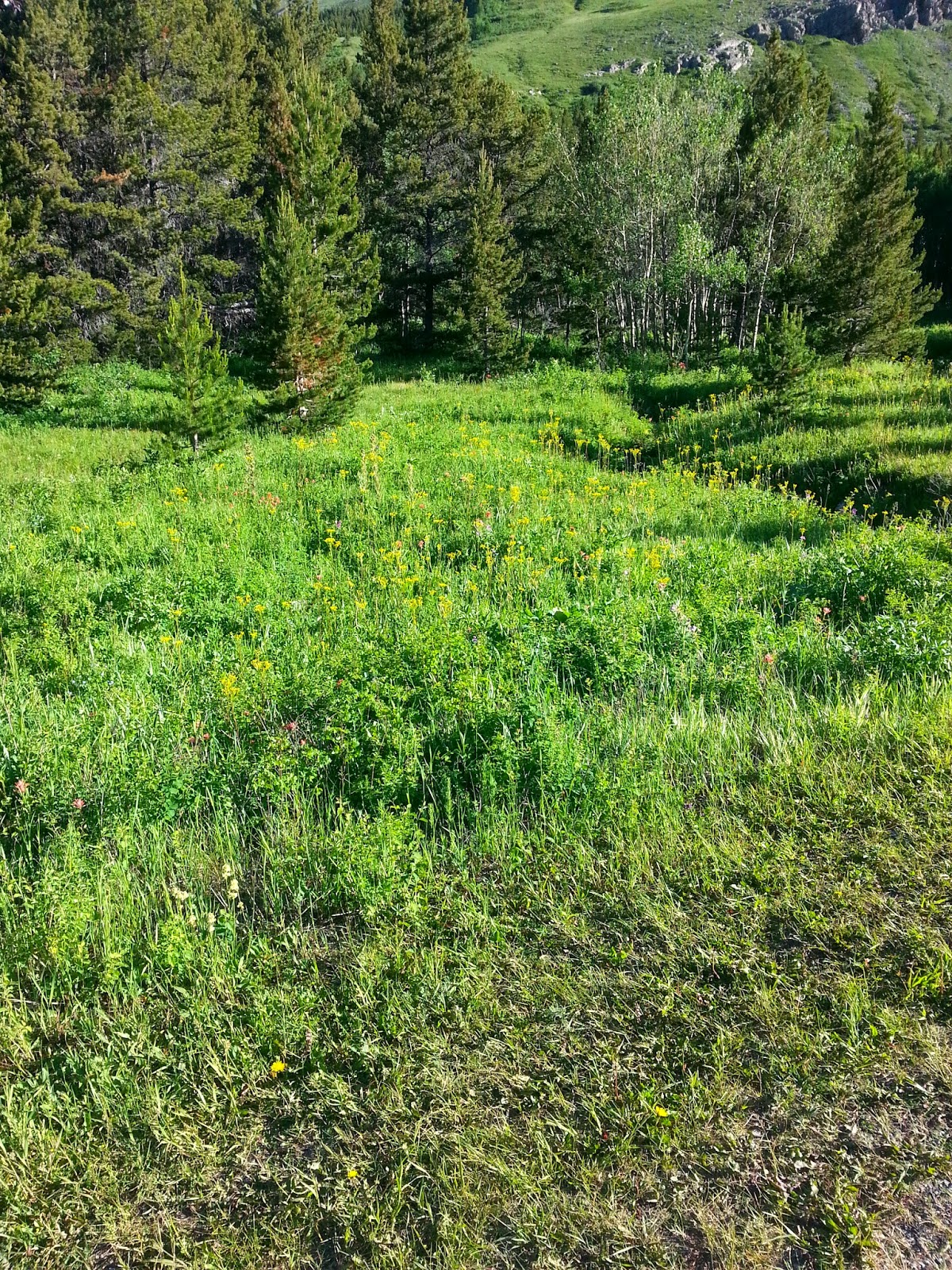 Lots and lots of wild flowers
After my run I met up with Genevieve to go for a hike. We made it about 5 miles or so seeing a few snow fields, while we gradually crept closer to Grinnell Glacier. 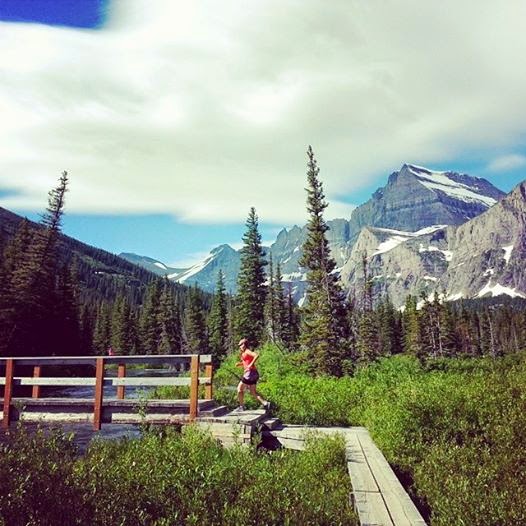 One of the featured runs in Runner's World was this trail in Glacier National Park. Had to get an action photo captured!

While Genevieve and I went for our hike, Cynthia, Daniel, and Tyler went for a walk around Swift Current Lake. We all met up afterwards, checked out, and headed out to go back through the park to head back to Flathead Lake. We went passed the same scenery but now saw it from the other side of the road. We took the car under the weeping wall, which gave my car a bit of a shower. Once we made it to "the loop" Genevieve and I decided to take the bikes down the hill. It was pretty steep and fairly narrow so Tyler trailed behind us slowing traffic a little-sorry to the fellow drivers out there! However, it was such an awesome experience to be able to see the gorgeous views from my bicycle! I got to go through the tunnel and I yelled the whole way through! 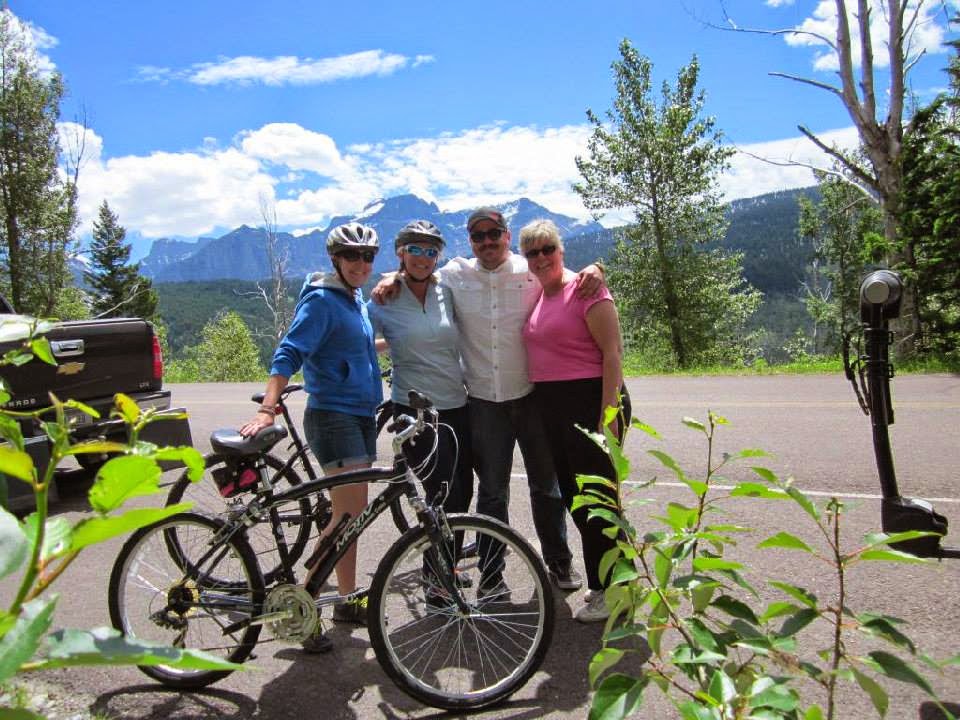 About 5 miles from the loop Tyler pulled over and we piled back in to make it down to nice turn out to see the rushing river. From there we headed over of the park, but not before I could get my photo in front of the official sign! 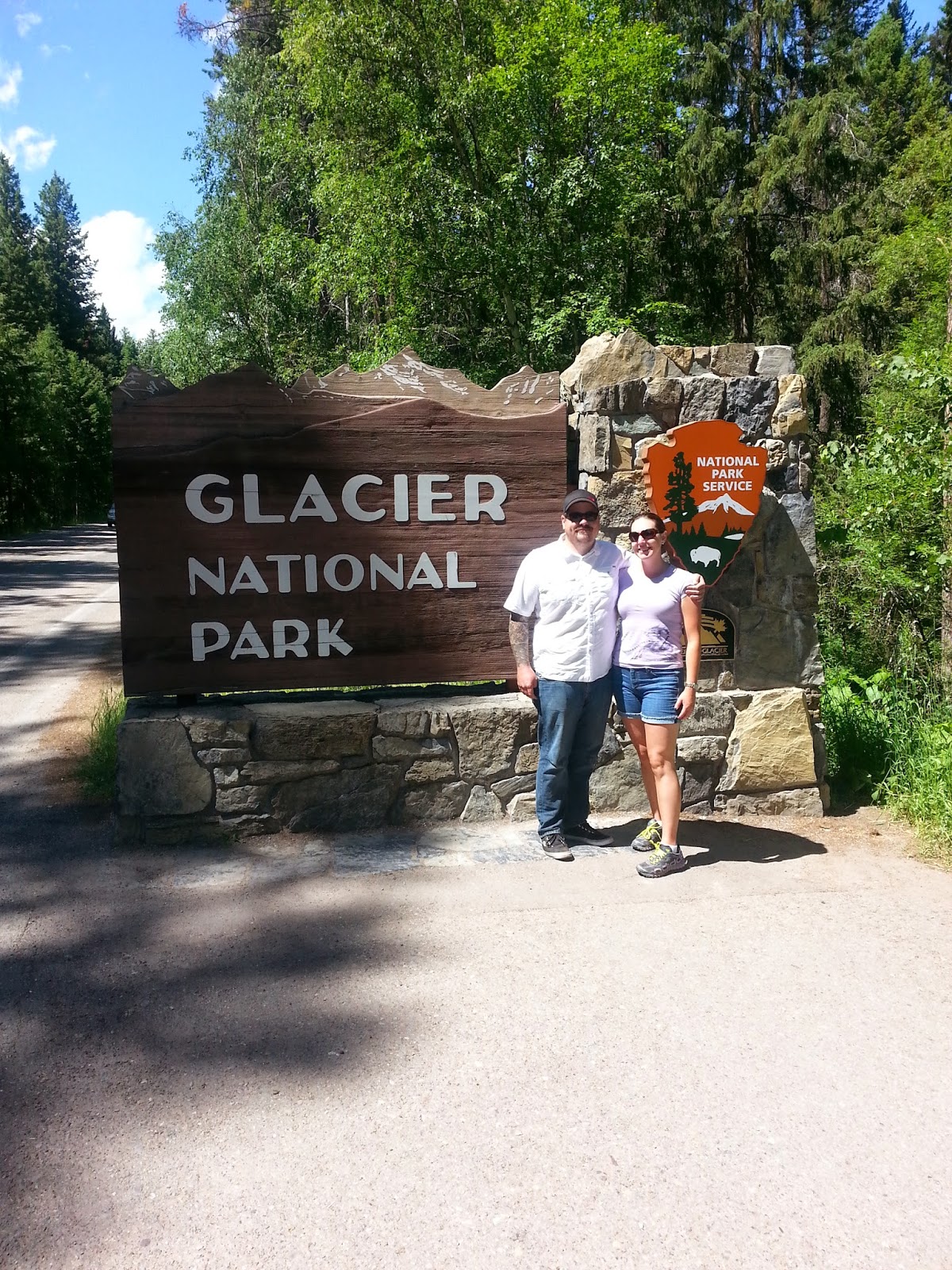 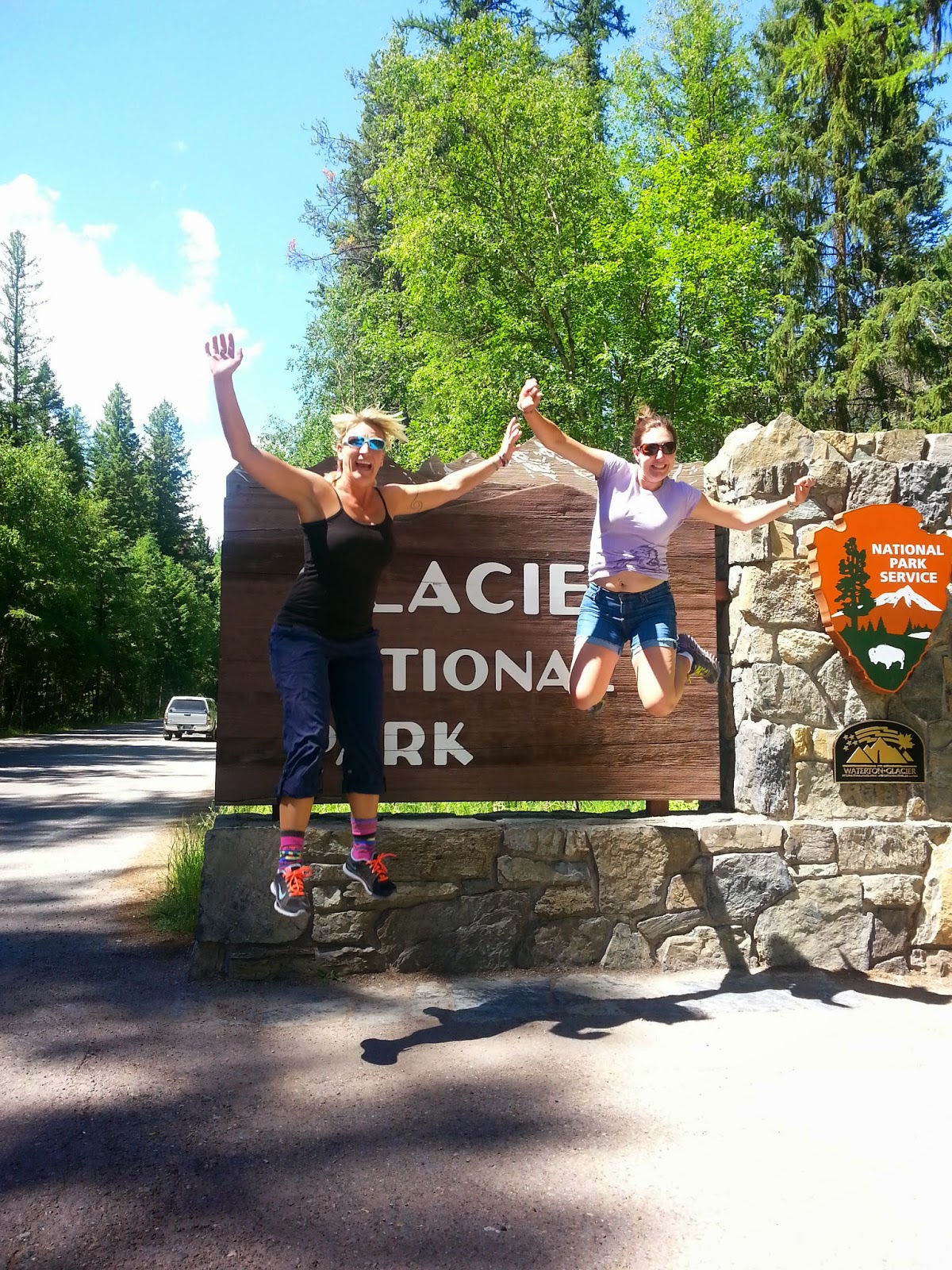 Action photo with my soon-to-be-sister Genevieve

I had such a blast in Glacier and I am so grateful for my future parents, Cynthia and Daniel for this wedding present. Tyler and I had so much fun and it is a trip we will always remember. Thank you so much for your generosity and love!
travel