By Unknown - June 07, 2014
About 6 weeks ago I took our dog, Kitty, to the vet to check up on her. Tyler and I had noticed she had begun to snore REALLY loudly and not only that, she seemed to breathe really heavy even when she wasn't doing anything. It had been quite a long time since Kitty had gone to a vet so we figured it was time.

When we took her in the first thing they did was weigh her. She weighed in at 65 lbs. Evidently the reason why she was breathing so heavy was due to her extra weight  (Side bar: I find it fascinating that in our culture the first thing the vet did was talk about the obvious- Kitty was overweight. He didn't sugar-coat, didn't offer up a pill or shake, he merely said feed her less, give her veggies, and be more active. Now, if it were me talking to a doctor, they MIGHT tell me I was overweight and recommend losing some of the extra weight if that would help me with whatever problem I was having. However, most likely they would treat the symptom-back pain? Narcotics and muscle relaxants. Heavy breathing? A CPAP and some allergy meds. High blood pressure or cholesterol? More meds. I love that a vet can be brutally honest with you but a doctor will normally skirt around the real issue. I think this is getting better but we still have a long way to go. And I am not innocent; as a nurse I rarely encouraged people to lose weight to help with their symptoms.. We all can be better. Anyway, end sidebar.)

The vet said he wanted her to lose about 10 lbs because for a dog her size she doesn't need to weigh more than about 55 lbs. He gave her some vaccines since she was due and told me to increase her exercise as well as change up her diet. He recommended giving her a little less of her dry food (1 1/2 cups to 1 1/4 cups) and supplement with veggies-carrots, broccoli, and cauliflower.

This is Kitty about 6 weeks ago: 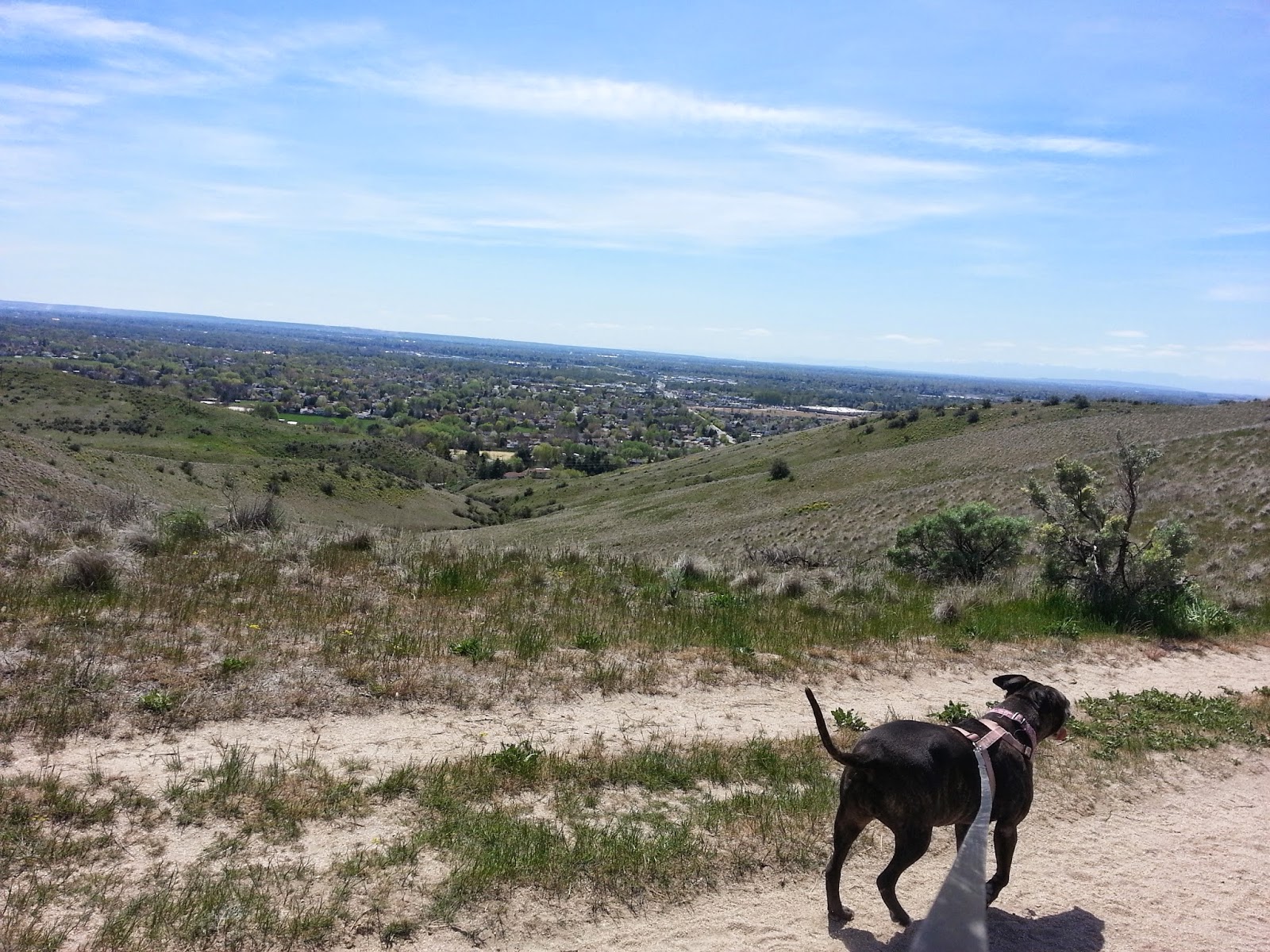 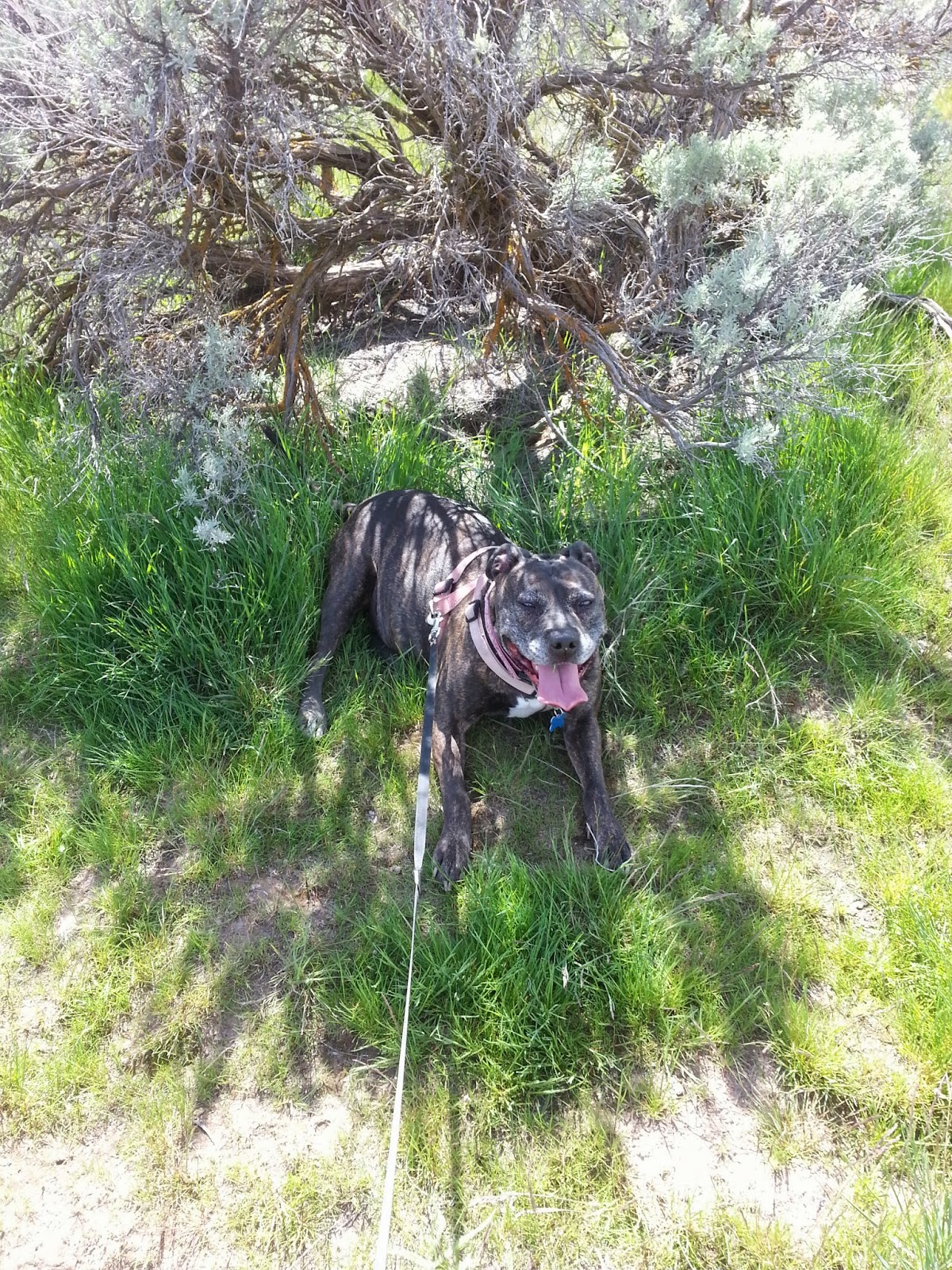 Chilling out in the shade 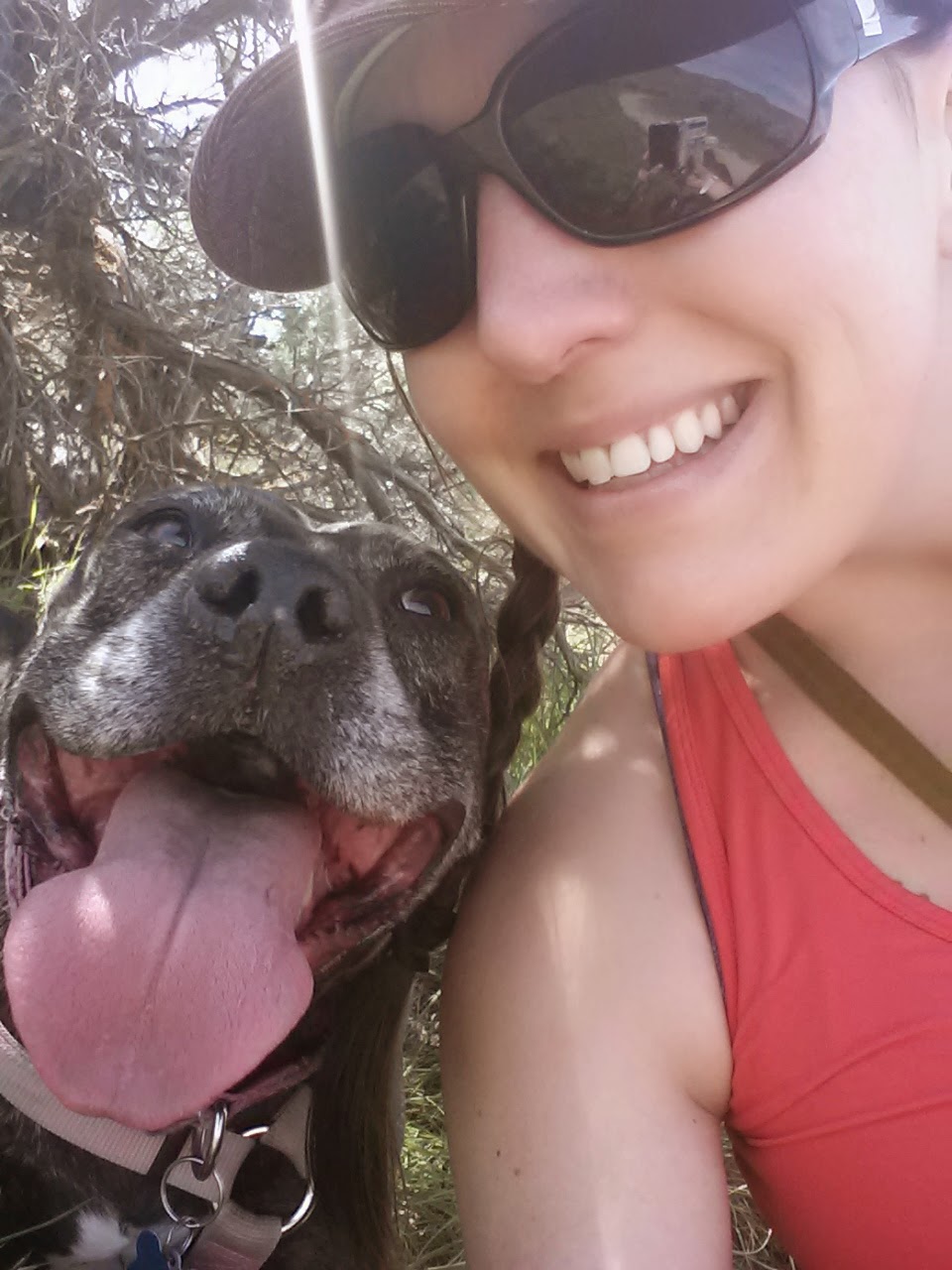 The first time I tried to give Kitty some carrots she ate right around them. We decided to mix the veggies together and cook them a little with some beef broth. We did that for several weeks until we realized Kitty had gotten used to the veggies and now will just eat raw veggies. The other day Tyler dropped a raw potato on the floor and Kitty went to town. He says she is officially my daughter now :) She also eats raw green onion too. She seems to still not be a fan of raw yellow onion and raw celery but who knows, her taste buds might change!

She and I started doing 30 minutes walks but when it got hot we started doing 2 15 minute walks, one in the morning and one in the evening. Since Memorial Day I have been doing a running challenge, trying to run at least 1 mile per day for 40 days. I decided to turn our morning walk into a 1 mile run before it gets too hot. We are inconsistent with walks in the afternoon because it is so warm and I haven't figured out how to walk after 9pm in my routine. We will keep working on that.

Today I decided to weigh her. I weighed myself first and then picked her up calculating the difference. Kitty has lost 6 lbs in 6 weeks, which is super impressive for a dog! I am so proud of her. At first she would whine quite a bit when we cut back her food but she is getting used to it. As long as I feed her by 730am it's not too bad.

Here are pictures of her from this morning to mark her progress: 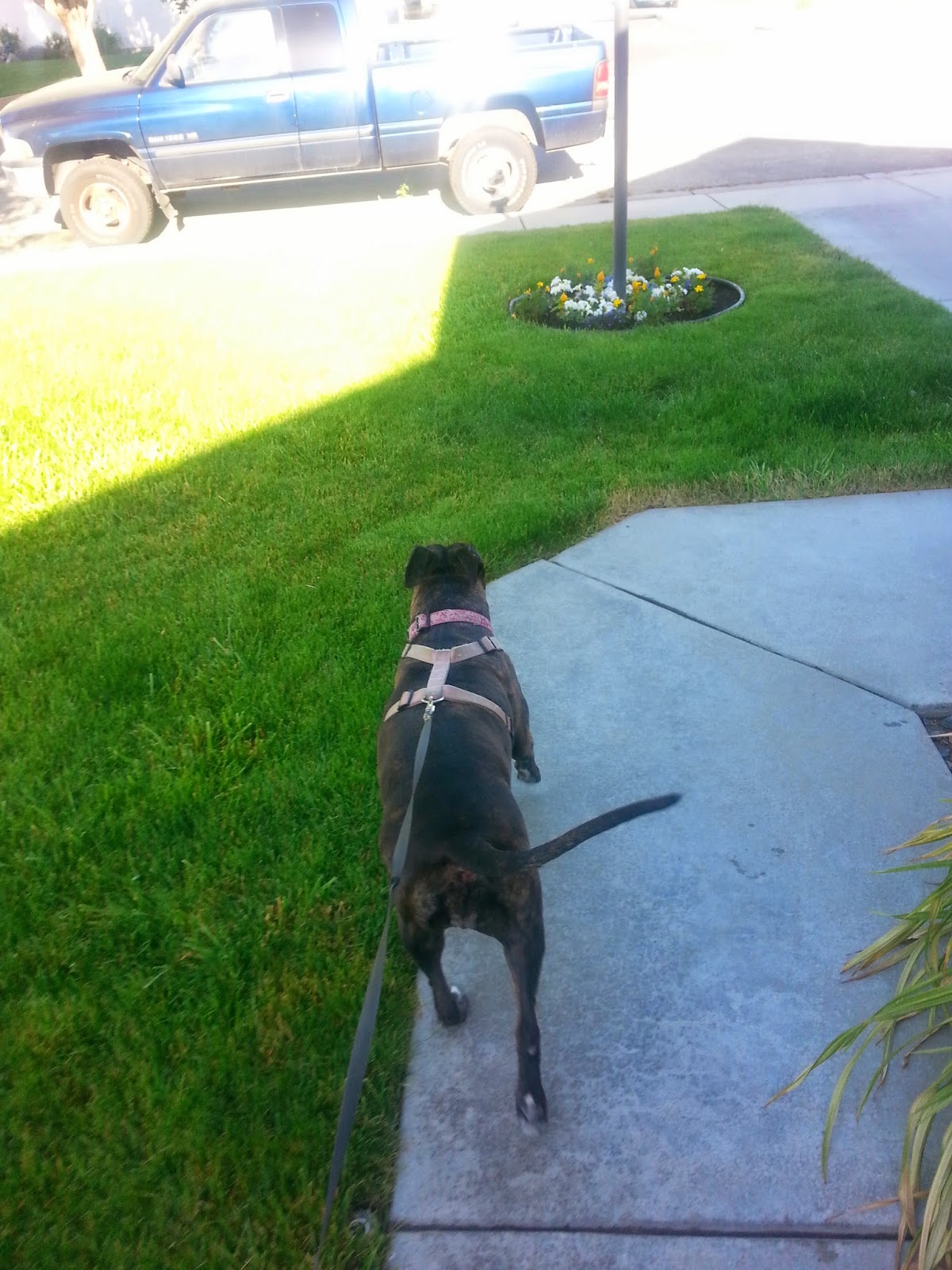 A shot from the back. Her sides have definitely thinned out 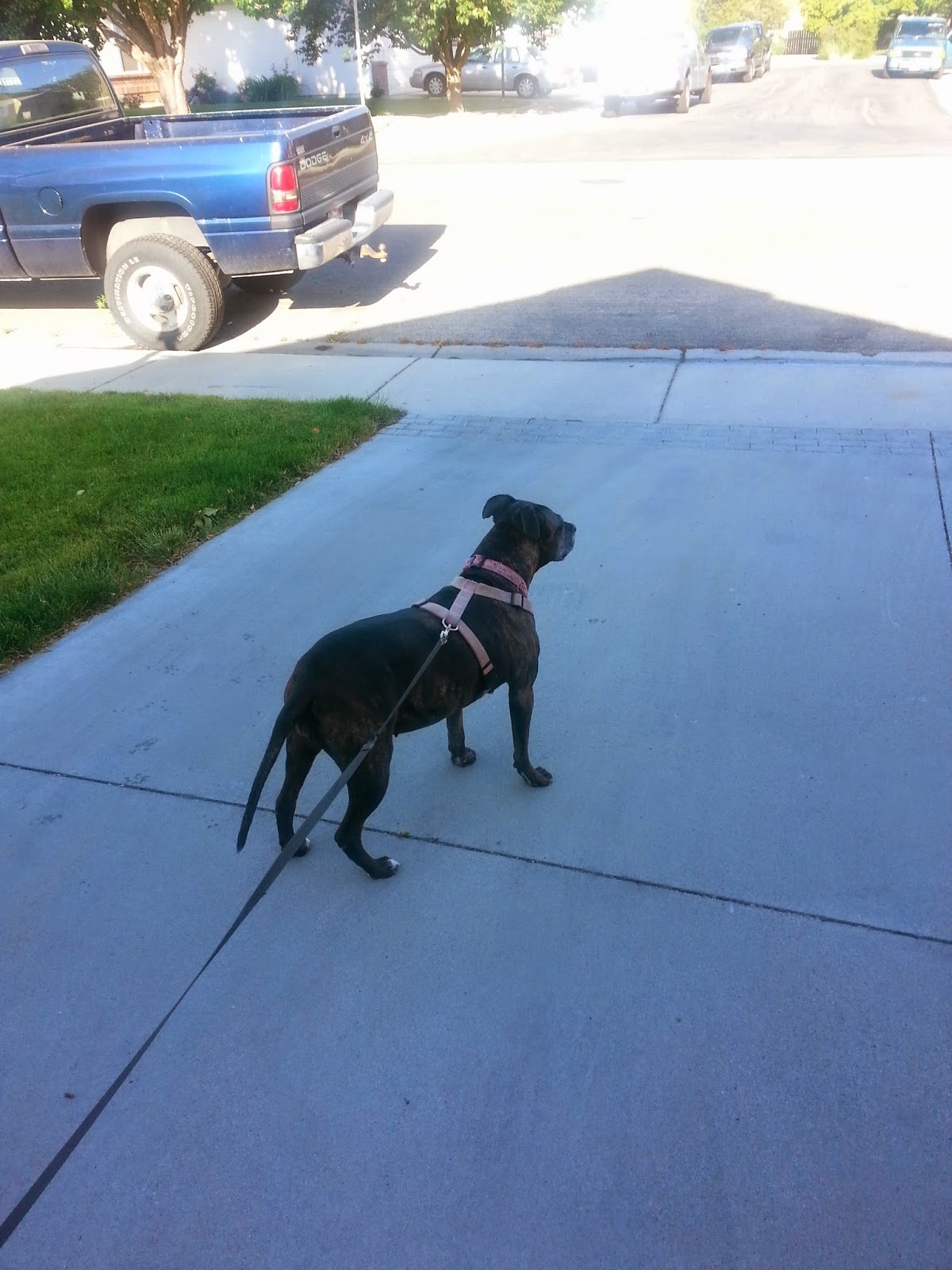 The pot belly is slowly going away 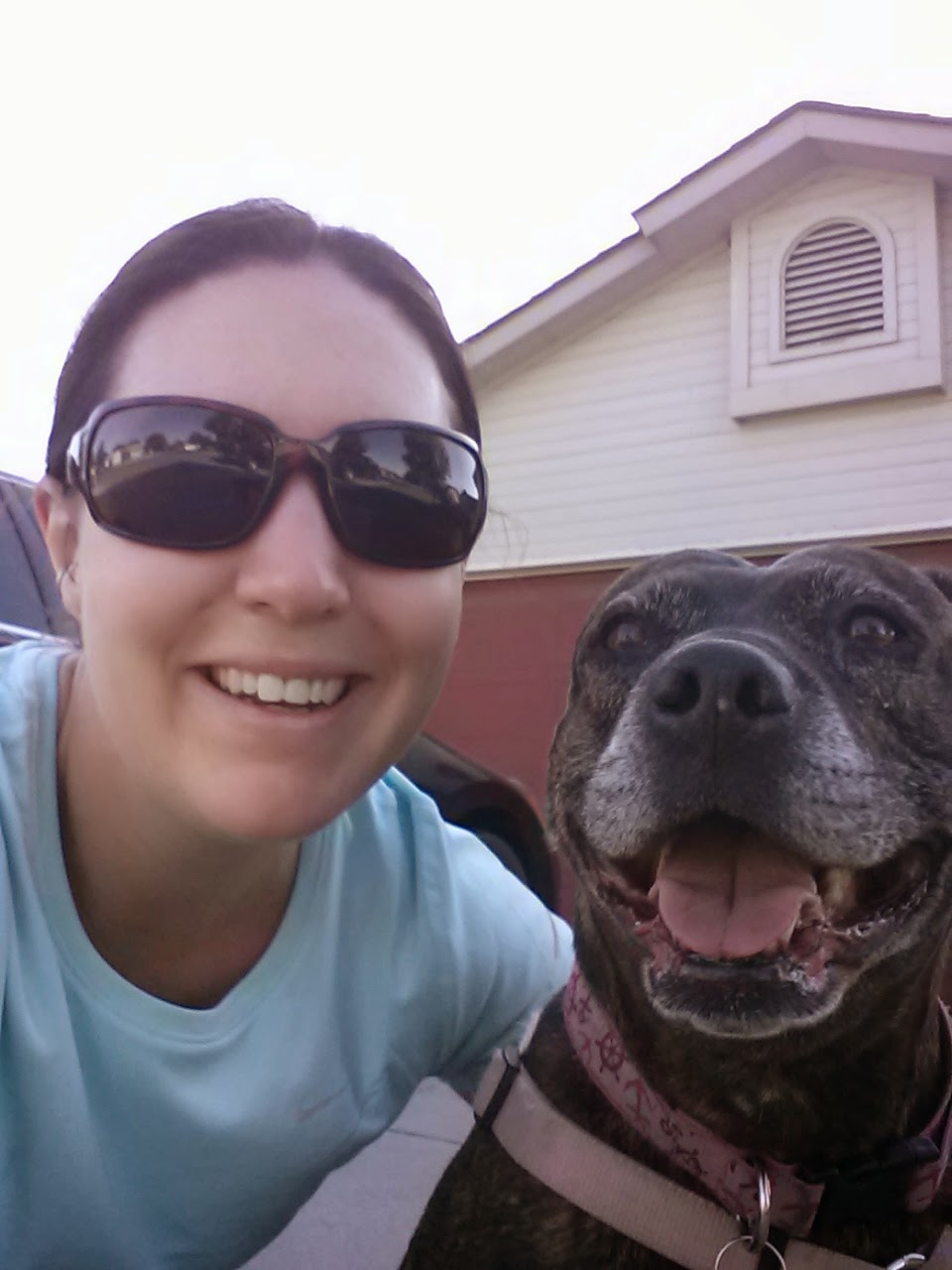 And she still loves selfies!!!

Hopefully she loses the last 4 lbs in the next 6 weeks. I will keep you posted!
dogs