Tinkerbell: my first half marathon

By Unknown - January 20, 2014
﻿
Yesterday was an incredibly eventful day that I will remember forever. It was not only my first RunDisney run but my first half marathon. I was supposed to run the Famous Idaho Potato half marathon last May before my knee started to hurt too bad to continue training. Fortunately, my knee has gotten much stronger and I was able to finish the Tinkerbell half. 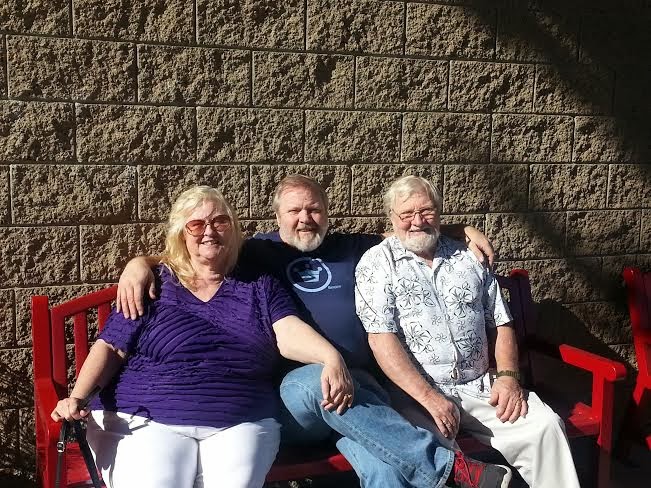 The trip to Disneyland started a few days before the race. My parents, brother, and I headed down on Wednesday to see my grandparents, who live in Oxnard, CA. We had lunch at Stone brewery in Escondida before we stopped in Oxnard for the night. It was so nice to see them and get to visit a bit before heading to Anaheim. 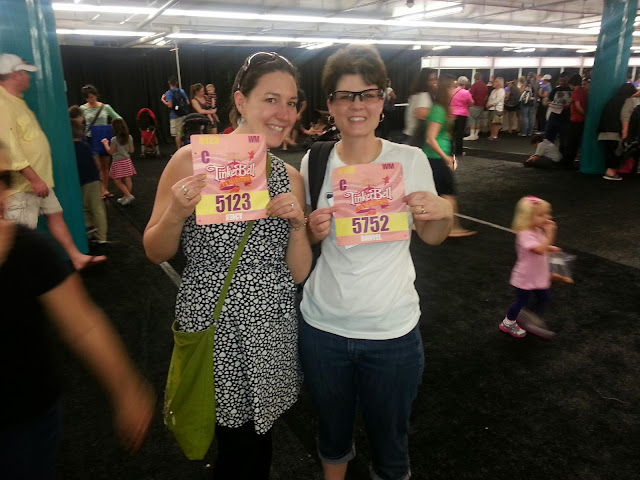 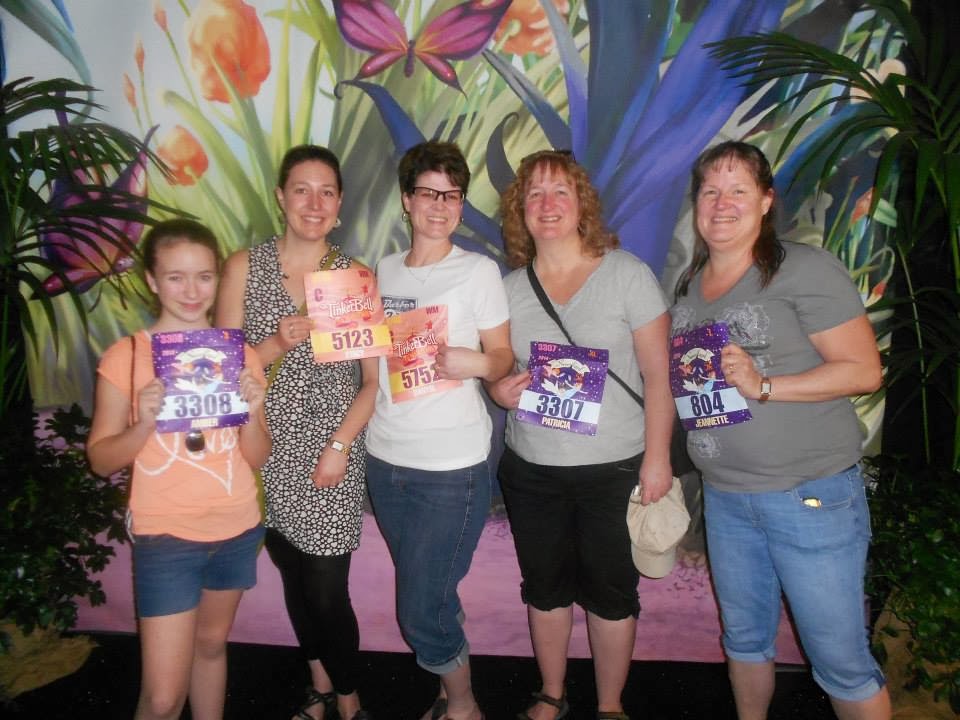 On Thursday we made our way to Disney Land where we met up with my aunt and cousin as well as my other cousins. We headed to the Expo to pick up our bibs and other race items (see above). It was pretty busy but well organized. The bibs had our names on them, Disney is just too cool!

The next morning we got up early to see my mom, Aunt Trish, and cousin Amber run the Neverland 5K, which was really cool. Danyel and I made some signs and got to go into California Adventure and see them finish. It really got me excited for our race! The all did great and had a fantastic time. I am proud of all of them! My mom is such an inspiration because at 55, she is pushing herself and finishing races and is on to planning her next race already! 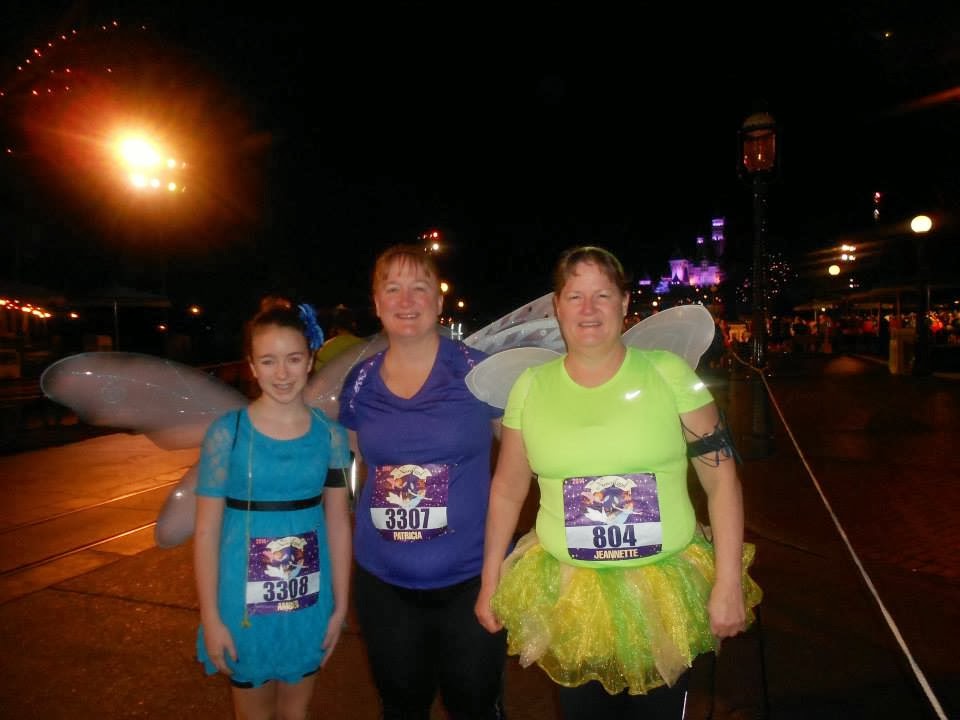 So cute in their wings and my mom's tutu!

Then we spent most of the day at Disneyland, which was a lot of fun. I was counting and I think I have been there either 5 or 6 times, but there is always something we do differently. However, I am officially retiring from Splash Mountain (too wet and cold) and will not be back until Tyler and I have kids to share the experience with! That evening we got to see the Tinkerbell fireworks show, which was really well done. It was worth fighting through the crowds. 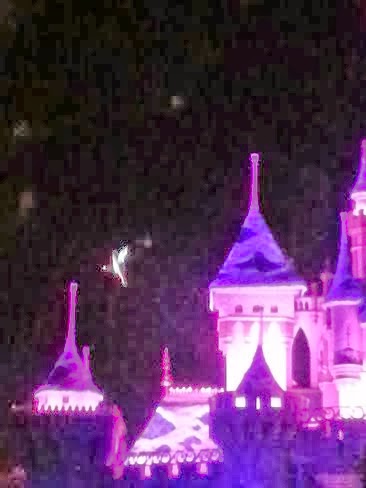 Then we spent Saturday at California Adventure, which has had a lot of new rides added since I was last there. It was fun to go on some new rides and be able to drink a beer in the park! We took it a bit easier since we knew we needed our energy for the 1/2 marathon in the morning. 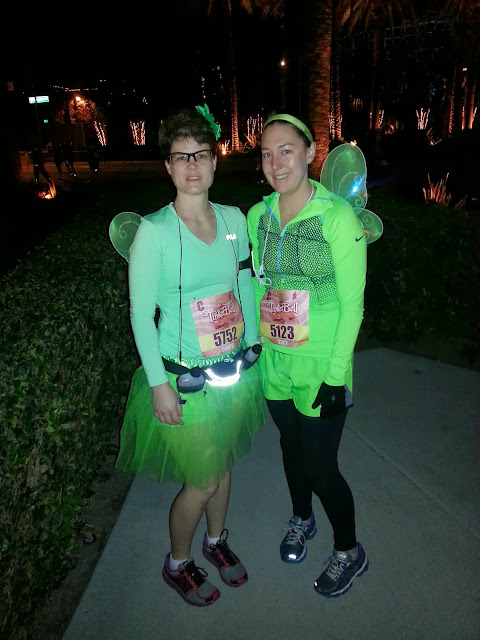 Danyel and I all dressed up in our running outfits! I didn't end up wearing the wings because I didn't want to mess with them. I still glowed really well in the dark. 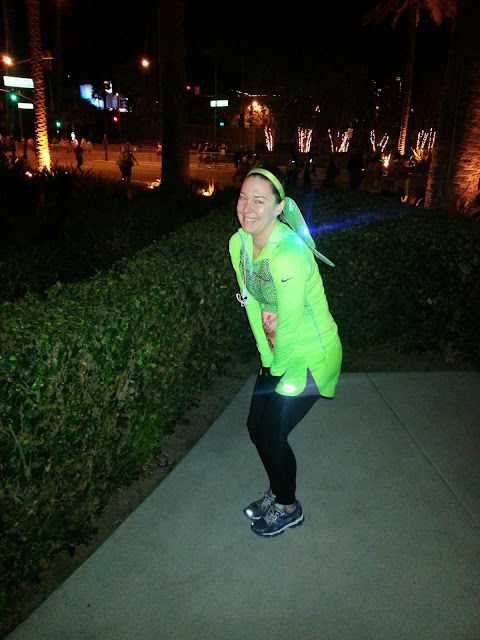 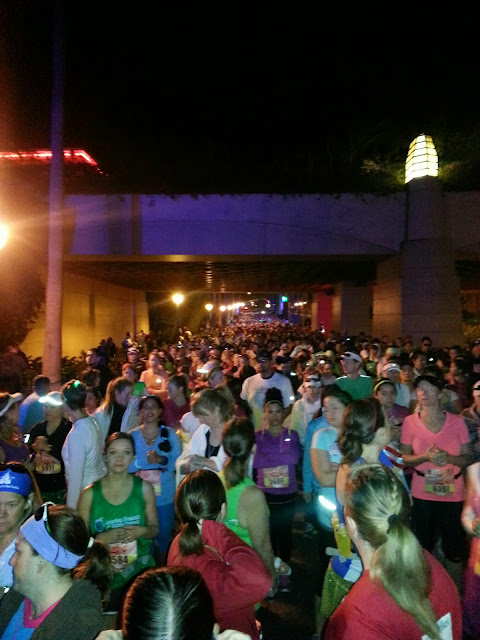 There were 14,000 people running the half marathon! So crazy! This was a shot of the people behind us. 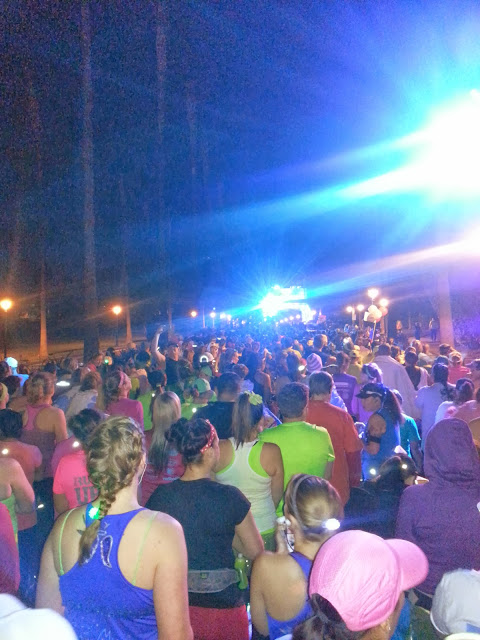 This was a shot of the people in front of us. 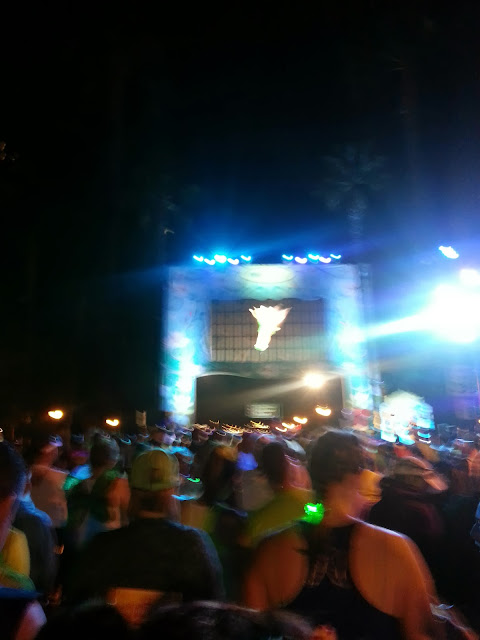 Tinkerbell on the screen starting our race!

Our race started at 5am, but since we were in Corral C we started about 20 minutes later. We started on Disney Drive under the overpass and ran the first 2 miles out and around the park. I realized I had to pee so as soon as we hit our first water station and bathrooms I bee-lined it for the port-a-potties. After that I felt much better and was really able to enjoy running through both of the parks. There were so many people! Staff, characters, marching bands... there wasn't more than 20 ft on the whole course without someone clapping for us! The music was turned on the rides were all lit up... it was magical. I felt like I was flying and was keeping up with the 2 hours and 30min crowd from the B corral, feeling good.
﻿ 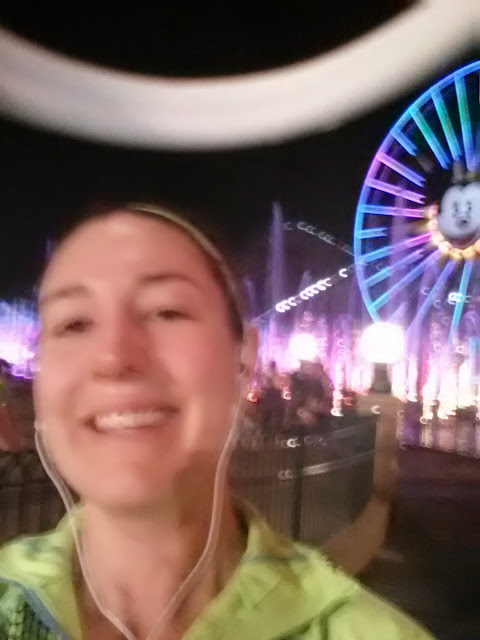 Between California Adventure and Disneyland I saw Joel amongst the crowd, which gave me an extra pep! 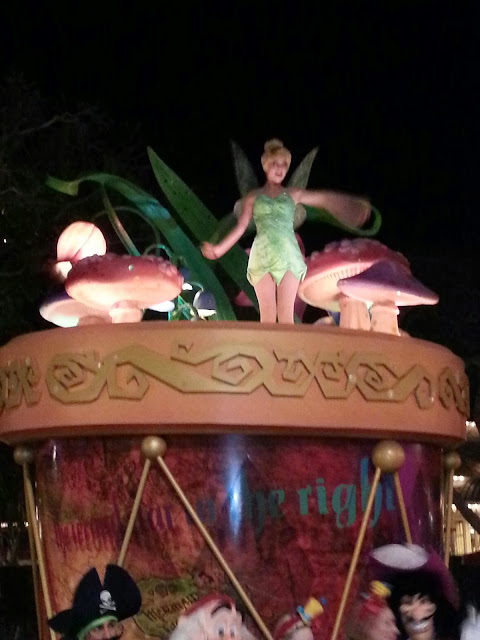 Miss Tinkerbell herself outside of the castle in Disneyland 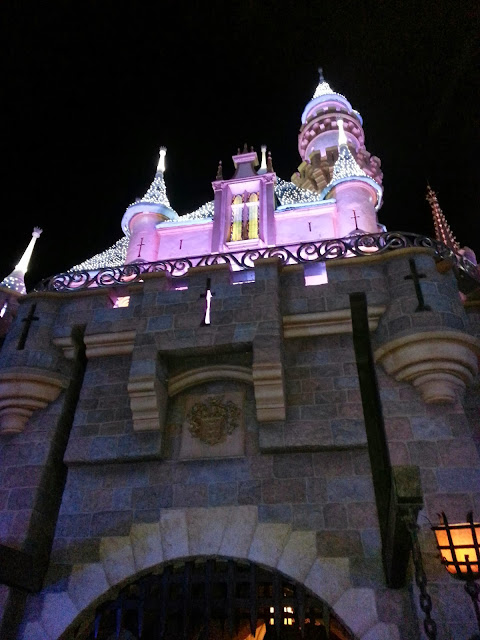 The half marathon runners were the only ones who got to run through the castle. I felt pretty darn lucky! 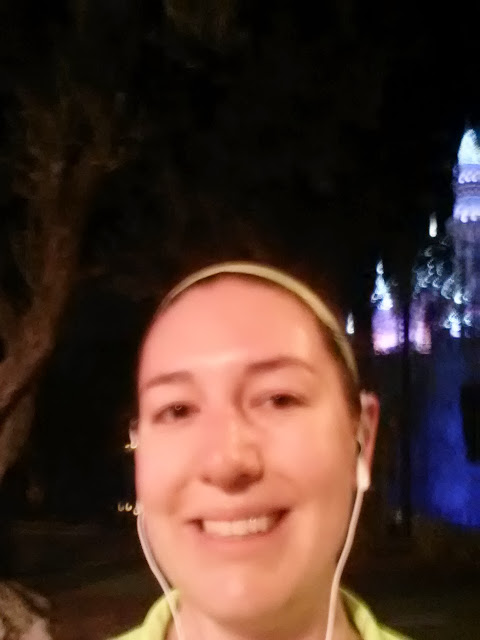 Selfie in front of the castle 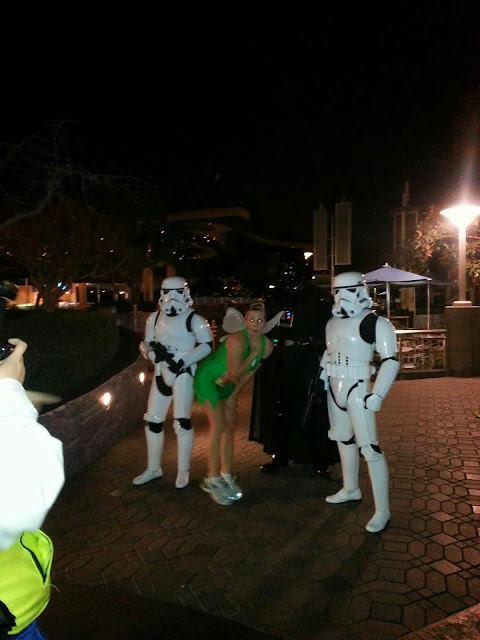 Took a picture of Darth Vader and the storm troopers just for Tyler! 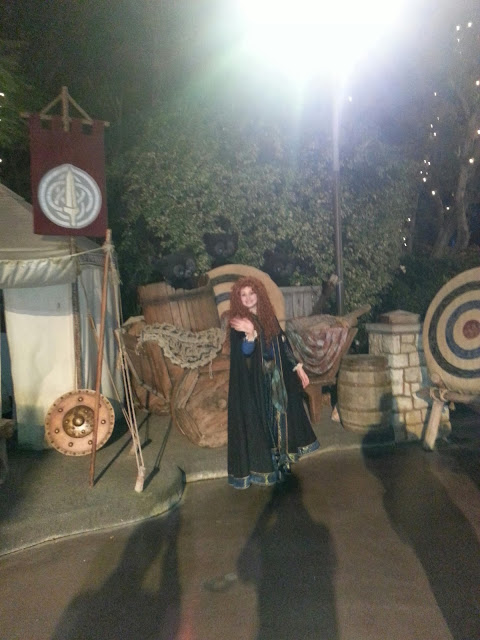 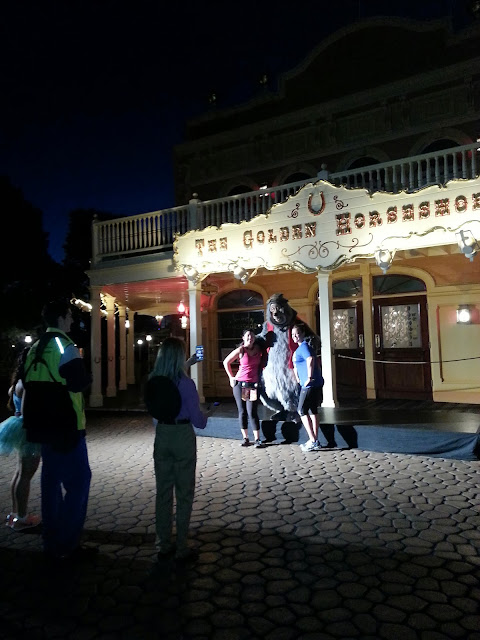 We finished running through the parks at about the 6 miles mark, ran through Downtown Disney (where I got to see Joel again!) and then headed to the streets in Anaheim. We had people out in the robes as well as people offering Red Vines and orange slices as we headed downtown. There were more marching bands and dance teams cheers us on. It was a blast! When I had been training I had started run/walking to help ease some of the joint pain I experienced when I added more mileage. Around the 8 miles mark I really started relying on running for 2:30 min and then walking for 30 sec. I made it to mile 10 and then I really started to get tired. Between mile 10 and 11 there was a lot of walking. I ran when I could but just tried to regain some strength for the last 2.1 miles. Mile 12 was better in that I made it back to my regimen of run/walking and then I had to have a little chat with myself about where I was at. I knew I couldn't make it before 2 hours 30 min so then I wondered if I could make it to 2 hours 35 min. I reasoned it would be tough so I made a decision. I was going to run the whole last 1.1 miles, even if I was running slower than someone could walk! It was tough and I to cheer myself on to get through it. I came to Disney Dr, before the Simba parking lot (which was the end of the race) and then Tyler called. I didn't answer it because I didn't want to finish on the phone but knowing he had been watching my Facebook posts and called to congratulate me at the end was an extra boost I needed. Then right around the corner I saw my family. Even though it took a lot of energy to smile, inside I was overjoyed to see them. Immediately following I saw Daisy Duck, Minnie and Mickey. I gave them all high 5's before crossing the finish line. It was incredible! Exhausting yet incredible!

I collected my medal, took a finisher picture, got my food, and then tried to find my way back to my family. There were tents with last names (ie A-D, E-G, etc) and I figured out we were supposed to exit through the tent with our last name. Apparently I thought that T came before Q in my delirious state and went through the wrong tent! Oh well, I found my family. My brother called Tyler and I got to talk to him, which made me start to cry from all of the overwhelming emotion I felt. I finished. It was glorious!

I am very grateful for the experience and those I got to share it with. I am not sure whether another half marathon is in my future but I am proud to say I have completed one. What an amazing weekend!!! 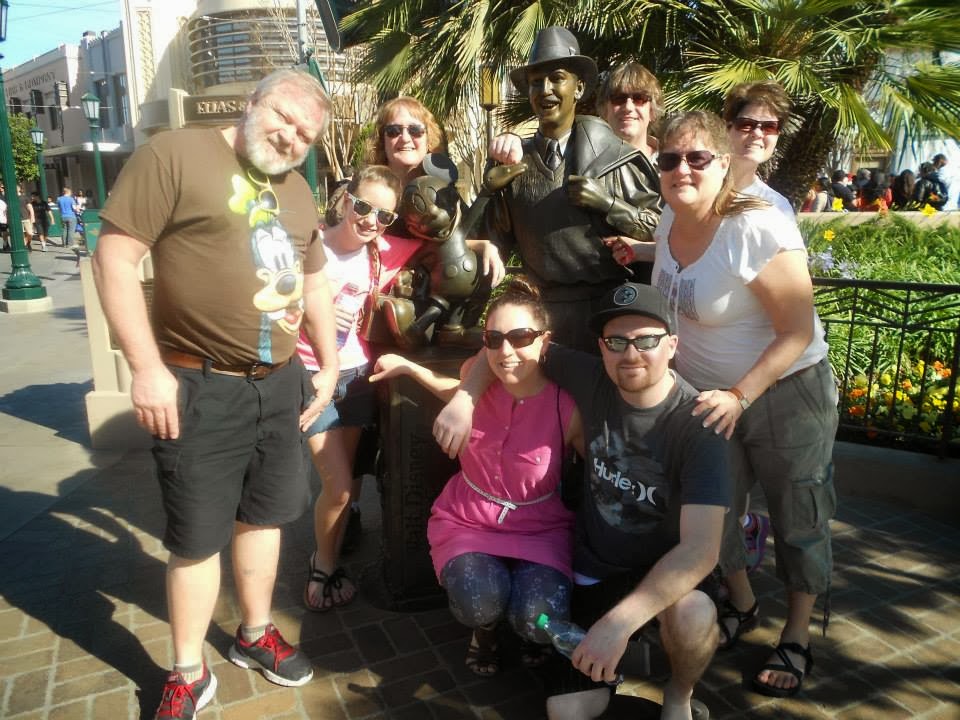