By Unknown - May 09, 2013
I am finally coming out of denial and realizing that I have officially hurt my right knee. A little background for you: After the Barber 2 Boise 10K last October my right hip as giving me a bit of trouble. I started doing some research and discovered how important stretching is for a runner, particular post-run. I quickly started incorporating this into my routine, as well as a visit to a local running store to buy some new, awesome shoes. Within a few weeks I was doing great!

Then I did the Christmas Run in December of 2012 and this run had a SERIOUS incline about .5 mile into the race and didn't let up for 2 miles. After the incline we had to back down and by the end of that race my right knee was really starting to bug me. Luckily I was able to take some time off running and I seemed to recooperate well.

Flash forward to training for the sprint triathlon 3 months later, my knee did pretty good until I would add incline or run farther than 3 miles, which was fine because I only had to run 3 miles for the sprint tri.Once I had completed the triathlon I had to start training for the Famous Potato coming up on May 18th, which was going to be my first half marathon. After my 7 mile run 5 weeks ago I was starting to have much more pain in my knee, but it would stop when I wasn't running. No other activity bothered it. After than even my shorter interval runs would start to bother it, but again as soon as I would stop it would get better. Then 3 weeks ago I tried to attempt an 8.5 miles run and after 5 minutes of running I ran/walked it until mile 5 and then had to just walk (which still hurt but I had to get back to my car, PLUS my running buddy, Danyel was still trying to get her training in and I didn't want to let her down!).

Now 3 weeks later, 9 days before the race, I am still not free of pain. My knee is still slightly swollen and almost all activities irritate it. So, I am going to see a doctor today to hopefully get an XRAY or MRI to see what the damage is. Then I plan to hopefully see a physical therapist (will update once I know more). I want to get back to optimal condition so I can continue to run in the future. I do not want surgery and I do not want to permanently injure myself by not listening to my body.

This is has been hard for me because a big part of me just wants to do it anyway but I know that is not the best idea. I realized (with the help of Tyler and my mom) that I am not letting anyone down, including myself, by not running this race and that I will keep exercising and get even stronger than I am now, with time and patience. It seemed like I was going backwards and I feared that I would have excuses to give up working out regularly and I would lose the momentum I have had over the past 18 months. However, I have come to realize that even if I can't run it does not mean that I can't do other things and maybe I need to really watch my diet more since I can't move as much and I need to spend more time discovering other activities that I can love. This is not the end of running for me and I will perservere! :) 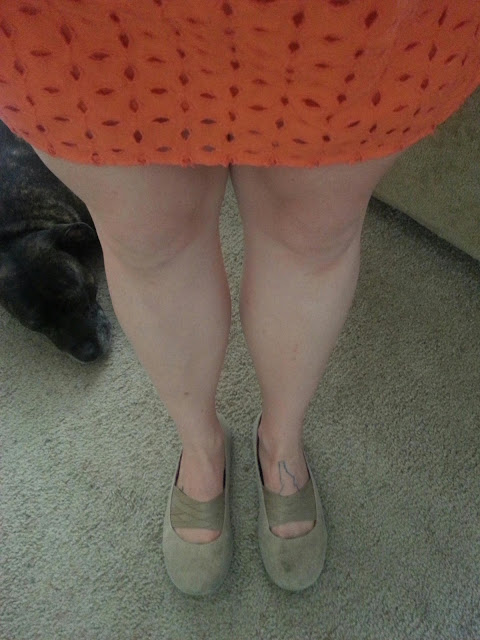 I need to give these bad boys love and appreciation for all they have done for me over the past nearly 28 years! They are strong and beautiful, maybe a little damaged for the moment, but they are the only legs I got and I need to respect them.
P.S. I love how Kitty is in the photo! This dog is in a lot of photos because she likes to follow me around. Love her :)
running